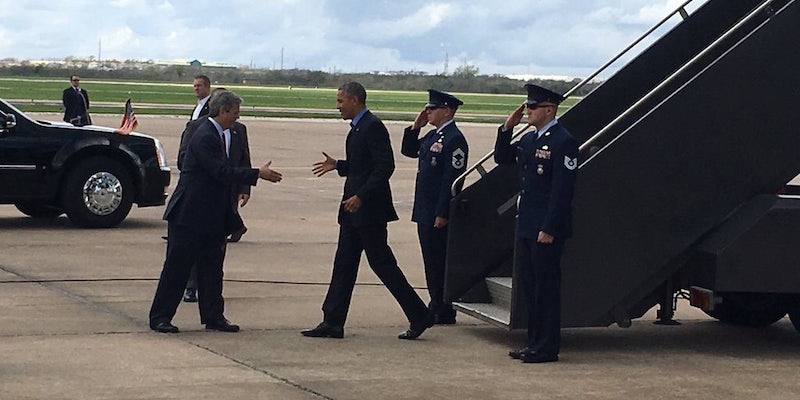 Photo via the Mayor's Office of Austin

SXSW Interactive has always been the opposite of Las Vegas in that what happens in Austin doesn’t stay in Austin. This year, that was more true than ever as the U.S. Conference of Mayors hosted a delegation of mayors from across the country to participate in a special programming track at SXSWi, the technology portion of the week-long festival that also celebrates innovation in film and music. What we learned by mixing things up with leaders in the tech industry could have profound implications in how the tech industry and the public sector view each other as opportunities for innovation.

Contrary to the perception that innovation is the sole provenance of private industry, every mayor knows that local government innovates out of necessity. We don’t have the options of borrowing or printing money or passing unfunded mandates off onto lower rungs on the government ladder. We have to get the job done with the resources we’ve got.

Every mayor knows that local government innovates out of necessity.

But many mayors don’t know that the tech industry is a resource that’s available to them. By interacting with leaders on the tech side at SXSWi, the mayors who visited Austin realized that there are opportunities to collaborate with leaders in the tech sector. Last weekend the mayors hosted a pitch session on public-sector solutions—imagine Shark Tank crossed with Model United Nations—in which entrepreneurs proposed tech solutions to public problems.

Every proposal imagined a way to do government better, and every proposal—every single one—filled a need identified by a mayor. The idea that a mayor could collaborate with the tech sector to come up with innovative public policy ideas is not radical in Austin. Innovation is part of our DNA here.

Another lesson learned at the U.S. Conference of Mayors is that we need to create opportunities for leaders of tech and local government to interact. Many of the mayors came from cities that do not attract a lot of venture capital from the tech sector, and it’s not because these mayors lack the vision or imagination to embrace tech solutions. They just don’t have the regular interaction with leaders from the tech industry, and that’s a relatively easy fix.

This is not a one-way street in which the tech industry bestows its benevolent genius upon a grateful citizenry. Local government can benefit the tech industry by providing a platform to prove new products. We shall need to figure out how best to reconcile a city’s responsibility for things such as public safety with the need to provide new economies and businesses space to innovate and succeed. But the prize is huge, so we both need to innovate together.

These relationships are crucial, because as we learned at SXSWi, the two-way street connecting local government and tech is not always a metaphor. Last Saturday, we saw a demonstration of Google’s autonomous vehicles. Some experts predict that these driverless cars will be sold to the public before the decade is out. Regardless of whether that is true, the future of the tech’s next generation doesn’t seem so far off once you see a driverless car demonstration.

Local government can’t sit back and wait for this to happen. We need to be proactive in how tech impacts our cities, whether it’s autonomous vehicles or any of the innumerable examples of how technology is radically transforming our economy. We can’t wait for this to become a crisis and instead need to focus on the transition, which is going to require local government to innovate perhaps more than it ever has before.

We need to be proactive in how tech impacts our cities.

Some may see the divide between tech and local government as a conflict. I have always seen this as a gap in opportunity and potential that needs to be bridged so that my city can find new ways to meet its responsibilities. I think the mayors who attended the U.S. Conference of Mayors track at SXSW Interactive would agree with me. They have already taken these lessons back to their cities, and this relationship doesn’t end here. Next year, I hear even more mayors are coming to SXSW.

Get ready, tech industry. This is the future.

Steve Adler is the mayor of Austin, Texas.

Photo via the Mayor’s Office of Austin