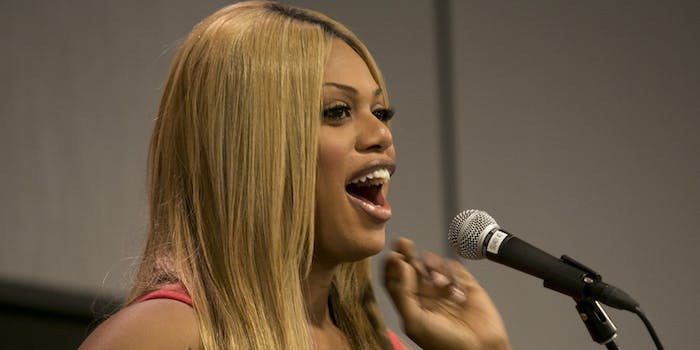 Shows like House of Cards are proving that TV is ahead of film. It's time for the Emmys to do the same.

When it comes to Netflix’s Orange Is the New Black, the breakout freshman dramedy that became a pop-culture phenomenon last year, the Emmys will have an unenviable task ahead of them. Of the show’s sprawling ensemble cast, who do you choose to single out for a nomination?

Orange Is the New Black offers an embarrassing wealth of great performances from its supporting players—from Kate Mulgrew’s imperious Red to Natasha Lyonne, whose Nicky Nichols proves how long overdue the actress is for a comeback. At the Golden Globes, the Hollywood Foreign Press settled on a nomination for Taylor Schilling as Piper Chapman, everyone’s least favorite character. The nod didn’t just feel like a compromise; it felt like a cheat.

On Gold Derby, early Emmy prognostications suggest that Mulgrew is the most likely nominee, the veteran actress best known for her role as Captain Janeway in Star Trek: Voyager. While the beloved Mulgrew deserves recognition for her transformative work, completely unlike anything we’ve seen from her before, there’s one breakout star that the Emmys would be wise to show love: Laverne Cox.

When Orange Is the New Black debuted last July, Cox quickly became a fan favorite among viewers for her layered and arresting performance as Sophia, a transgender fellow inmate serving with Schilling’s Chapman. It wasn’t just the role of a lifetime for Cox but an important step in breaking out of the tropes that had long shackled transgender media representations.

After getting her start in reality television (on VH1’s I Want to Work for Diddy), Laverne Cox found herself stuck to playing sex workers. “I’ve literally played a prostitute about seven times,” Ms. Cox told BuzzFeed. There’s nothing wrong with the sex industry, but Cox argued that such limited options fail to represent the diversity of transgender experiences.

What made Laverne Cox’s Sophia a necessary step forward was the depth allowed her character, every bit as complex and interesting as the Litchfield ladies around her. Representations of transgender people have a tendency to reduce them to simply one thing, damaging tropes that neglect to delve into the deeper realities of trans lives. Transgender activist, writer, and media scholar Julia Serano defines the two main archetypes as the “pathetic” or “deceptive” character, one out to arouse deceive us or evoke sympathy. Sophia is neither. She’s just a person. Something that should be so simple is positively revolutionary. When talking about Sophia, Cox agreed: “I don’t know of a trans character on television played by a trans person that has as much humanity as this character.”

Of course, that difference starts with the writing, and Sophia wouldn’t work without the strength of Jenji Kohan’s script. Series creator Kohan served as the Executive Producer of Weeds and made her way up through the television ranks on Gilmore Girls and Mad About You, what NPR describes as “stories about privileged white women and criminality.” In an interview with Terry Gross for NPR‘s Fresh Air, Kohan claimed that her entire intent is to use the Piper Chapmans of the world as a vehicle to tell stories we don’t hear often enough—like Sophia’s. “In a lot of ways Piper was my Trojan Horse,” Kohan said. “You’re not going to go into a network and sell a show on really fascinating tales of black women, and Latina women, and old women and criminals. But if you take this white girl, this sort of fish out of water, and you follow her in, you can then expand your world and tell all of those other stories.”

But Kohan isn’t writing Sophia’s story alone. Throughout Orange Is the New Black’s first season, Sophia deals with the pressures that her gender transition has put on her marriage and family, as well as a battle to secure her hormones in prison. And what gives these narratives gravity is that a transgender woman is involved in the telling, flawlessly bringing her own lived history to the role. It’s the right actor in the right part at the right time.

Her raw and darkly funny performance is a necessary counterpoint to Jared Leto’s Oscar-winning Dallas Buyers Club role, referred to as a “transgender Mammy.” Throughout the Oscar season, Leto stirred up controversy for his performance as Rayon, which critics and transgender activists felt adhered to stereotypes—what Jezebel called “a contrived plot device in bad drag.” As an Autostraddle post put it, the problem is that the role is written to make you pity Rayon, not empathize with her. In interviews, Jared Leto has described Rayon as an “unbelievably impossible person,” showing that he might not have understood her any better than the screenplay. If she’s impossible, she’s certainly not real to him.

This has sparked a debate about whether or not non-trans actors should play transgender roles, but Laverne Cox is the ultimate proof that an actual trans person does it better—both onscreen and off. Cox has been part of an important media moment in challenging the ways in which transgender people are covered, helping everyone tell stories like Sophia’s better. Earlier this year, Laverne Cox schooled Katie Couric during in an interview, shooting down inappropriate questions about her genitals.

In a response to the interview for Bustle, Kat Hache showed why we need moments like these to change the conversation. “It is seen as fair game to interrogate us, dissect us, and put us on display to gawk at our otherness, not as a means of…accepting us, but as a way of justifying their own oppressive beliefs and separating us from the status of ‘normal’ people,” Hache wrote. “It reminds us that we are in a subordinate status, we have no consent to access to our bodies.”

However, this isn’t just about education. The media’s Laverne Cox moment is about celebrating transgender people for their accomplishments, as women like Ms. Cox work to break the glass ceiling for trans actresses, and that should include this year’s Emmy awards. With a Supporting Actress nomination this year, Laverne Cox would be the first transgender person to compete for the evening’s top categories and could be the first trans actor ever to receive a major acting award. Actors like Boys Don’t Cry’s Hilary Swank and The Crying Game’s Jaye Davidson have received recognition for playing trans parts. However, Cox’s much-deserved win will go a step further to make history at an award show noted for too often playing it safe.

Right now, we are in Television’s Golden Era, a time when TV continually proves itself ahead of the game in terms of scope and ambition. Netflix, AMC and HBO are greenlighting projects like True Detective, House of Cards and the recently departed Breaking Bad, challenging work that’s far ahead of anything currently showing at the multiplex. As Jared Leto’s Oscar win shows just how far cinema has to go on trans issues, it’s time for television to prove they can get it right and keep looking forward. An award might be a small step to honoring the Sophias of the world, but surely it’s a start.