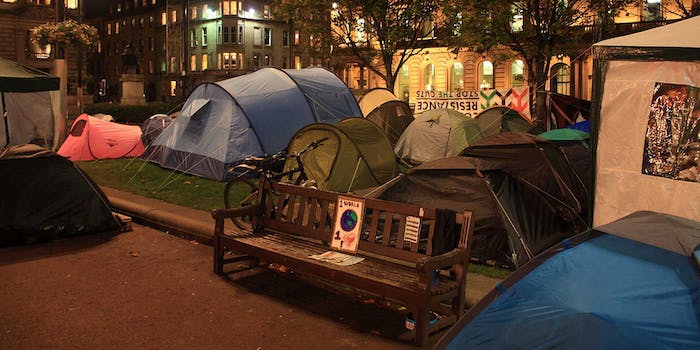 Lauri Love, 28, is accused of hacking the U.S. Army, among other government agencies.

28-year-old British hacker Lauri Love was arrested last Friday in the British village of Stradishall in Suffolk for allegedly hacking into databases of the U.S. Army, NASA, the Environmental Protection Agency, the U.S. Missile Defence Agency, among others. The arrest was made public after U.S. prosecutors filed an indictment against him in federal court in Newark.

Love, known online under the aliases “Nsh,” “Route,” and “Peace,” is the son of a Baptist chaplain at the nearby Highpoint North prison. His mother works there as a teacher. Love is also an activist, and participated in Occupy Glasgow.

Love was arrested by officers of the British National Crime Agency after an investigation by the U.S. Army’s Criminal Investigation Command. He has been accused of hacking into protected American federal databases in 10 attacks since October 2012, committing these break-ins in conjunction with three compatriots in Sweden and Australia.

“You have no idea how much we can fuck with the U.S. government if we wanted to,” Love allegedly said in an IRC chat. What Love and his colleagues hacked, he said, “is really sensitive. It’s basically every piece of information you’d need to do full identity theft on any employee or contractor.”

Love’s behavior “endangers the security of our country and is an affront to those who serve,” New Jersey District Attorney Paul Fishman said. He accused Love and his colleagues with cracking “thousands” of networks, according to the Guardian.

A source affiliated with the hacker collective Anonymous was skeptical of the extent of Love’s alleged hacking.

“If Lauri Love is the hacker he is alleged to be his motives were political. Government estimates of damages and attacks are always overblown. The charges against him clearly do not reflect ‘thousands’ of hacks,” he told the Daily Dot.

He has been charged with one count of unauthorized access to a U.S. government computer and one count of conspiracy. Law enforcement representatives said Love and his cohorts had gained access to information on 5,000 individuals, department budgets, and procurement processes. They took the information in the hopes of disrupting American government operations but have not, apparently, published the data.

Love is only the latest foreign hacker to be placed under arrest for cracking U.S. government websites, the most prominent of which were LulzSec’s Jake Davis, Darren Martyn, and Donncha O’Cearrbhail.