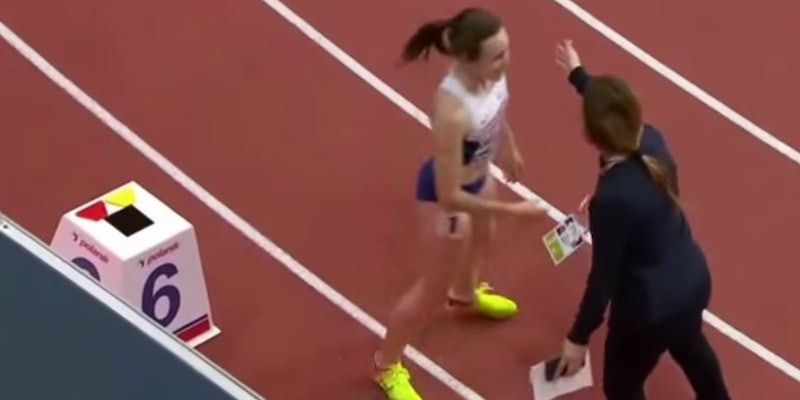 She would not be denied.

When you win a gold medal in track and field, you get to run a victory lap. Those are the rules. Those have always been the rules.

But for some reason, after winning the 1,500 meter finals at the European Indoor Athletics Championships on Saturday, Scotland’s Laura Muir was prevented from participating in her celebration. Not once, not twice, not three times. A race official stood on the track and physically prevented her from basking in the glory that track and field bestows upon its winners. Apparently, the official told Muir there wasn’t enough time for her to take the victory lap.

Perhaps the official forgot that Muir runs fast for a living. And apparently, she’s quite sneaky as well, because dammit, Muir was going to take her victory lap regardless of what anybody else said.

As for what Muir was thinking, she told reporters, via the Mirror, “I thought, ‘It’s my first medal. I’m not going to lose out on my lap of honor. I’m going.’ … I didn’t really say anything. I just thought, at the end of the day, she won’t be able to catch me.”

So, she fought the power and she ran, and, despite her gold medals (she also won the 3,000 meter race on Sunday), it might have been the most triumphant moment of her career.