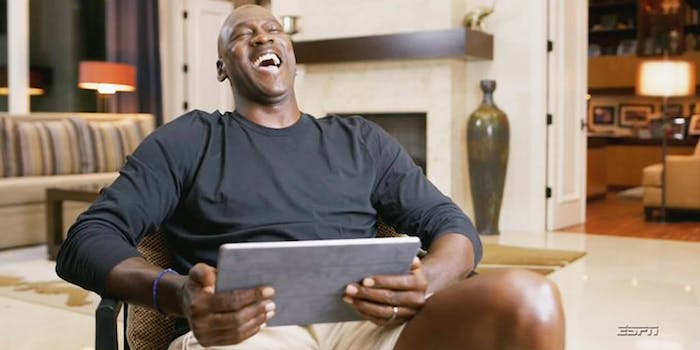 ‘Laughing Jordan’ is the latest meme from ‘The Last Dance’ docuseries

It has many uses.

Sports fans can’t get enough of The Last Dance, the ESPN docuseries about the career of Michael Jordan that takes a deep dive into the 1997-98 Chicago Bulls season. But even more importantly, the series—which aired its seventh and eighth episodes on Sunday night—has already given us some fantastic memes. Though, considering that the subject of the series is basically the patron saint of memes, it goes without saying that we’d be disappointed if it didn’t—and “Laughing Jordan” is the latest.

The latest came in Sunday’s second new episode when the show’s producer handed Jordan a tablet in which former Seattle SuperSonics point guard Gary Payton explained how the 1996 NBA Finals may have had a different outcome if he had covered Jordan for the first three games of the series—having shut him down in Game 4.

Jordan was uh, not exactly impressed with Payton’s claim, as he literally could not contain his uproarious laughter—at one point, pausing to stare incredulously at the screen before resuming.

The moment quickly went viral, as viewers imagined other sports-related topics that could benefit from the Laughing Jordan meme:

But of course, versatility is important with any good meme, as some of the funniest examples of the Laughing Jordan meme came in the form of everything from quarantine eyebrows to finding out an old girlfriend has gone full MAGA:

No comment from Payton yet, but one would have to imagine that coming back from that meme-worthy laugh would be even tougher than bouncing back from a three-game deficit. Hate to see it.