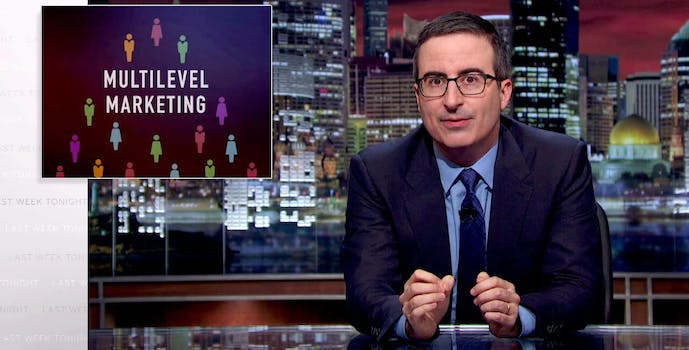 This guy said he was going to be on John Oliver—was it just a scam?

PR professional claims he was trolled, possibly by the shady internet service he keeps talking about.

On Wednesday, trolls convinced someone they were going to be featured on Last Week Tonight. Or maybe he made it up for attention?

Rich Leigh, a PR expert and author of the book Myths of PR, posted on Wednesday that he found out he will soon be featured on John Oliver’s comedy news show. His thread has since been deleted.

Long tweetstorm short, back in July of 2018 Leigh saw tweets from journalist Maya Kossoff complaining about pitches for a service called the Spinner, which is a manipulation service that promises to get people to behave how you want them to by serving them targeted advertising online. For example, the Spinner advertises that the service can get wives to “initiate sex” with their husbands.

It’s a shady service with unclear origins. Last year, the Daily Dot spoke to Elliot Shefler, Spinner’s VP of social and media, but he had no LinkedIn or a digital footprint, and also “declined to face the camera for a photo” in an interview with Forbes.

Leigh claims he investigated the company, learning about its microtargeting: Essentially a PR blast directed at the person of the customer’s choice. He claims to have traced the service to a London man named Mustafa Abdul Hamid.

Since Leigh’s investigative efforts, several Medium posts have been written about the service, including at least one that accused Leigh of actually being behind the Spinner. One post makes the argument that Leigh might be behind the service because he has discussed his investigation at sites like the Daily Beast and Forbes.

In the thread, about Last Week Tonight, Leigh denies he is behind the Spinner.

The TV appearance that wasn’t

Leigh said that Last Week Tonight writer Jill Twiss got in touch with him as Oliver’s show was planning a segment on both him and the Spinner. He included screenshots from alleged emails with Twiss in the thread.

It bears mentioning that Leigh (who is a PR professional) wrote out his thread with the step-by-step, GIF-heavy style that is often associated with threads intended to go viral. This also follows a similar trajectory to his Daily Beast and Forbes interviews, in which he uses his investigation of the Spinner to get coverage for the service.

However, that doesn’t necessarily mean he wasn’t emailed by a troll possibly connected to the Spinner, though the order of events does raise suspicions. Most damning, though the name “JILL TWISS” appears in the “sender” field of the email, the actual email address is redacted. Carvell seemed to suspect a PR stunt.

Leigh’s thread certainly had the tone of someone interested in amplifying his internet attention. But for his part, Leigh maintains his innocence in the matter. He told the Daily Dot in an email:

“It’s unfair to Jill. It was believable. The email address was – [email protected] – I’ve emailed loads of writers, journalists and producers with similar email addresses. Given the context – a controversial site that’s been covered quite a bit – and that it looked like it was going to be suggesting I was behind it – I believed it. I’m an idiot I guess, but I guarantee everybody else in my position would have done the same thing.”

The Daily Dot reached out to HBO for comment.