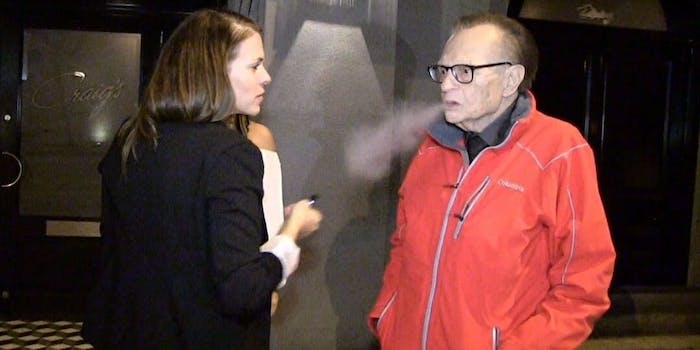 Larry King coughs like a maniac while vaping, becomes a meme

He's out of practice.

Larry King was once a three-pack-a-day smoker, but after suffering a heart attack in 1987, the news veteran gave up cigarettes for good.

But even 30 years later, King knows good smoke when he smells it. And when somebody offers him a vape, he’s damn sure going to test it. He’s just not going to look too smooth when he takes a hit off the vape pen.

The lure of the cucumber-flavored vape apparently was too much to overcome for King, a lesson he rudely learned seconds later. Here’s the video of King’s experience, via TMZ.

Naturally, the internet loved it all.

larry king hitting a cucumber-flavored vape handed to him by a stranger is extremely the only content that matters pic.twitter.com/v4Ss0OyWpO

The best thing to happen in the past 24 hours was witnessing LARRY KING LIVIN THAT VAPE LYFE BOOOOIIIII pic.twitter.com/Zzpft7d4KI

King is 84 years old and, apparently, he’s not afraid to expand his horizons. And people respect that.

A sampling of the Facebook comments on the TMZ page.

“Dude has like 3 days left in him. He could drink bacon grease, smoke crack and juggle chainsaws if he wants.”

“At that age, do whatever the F you want.”

“He may as well go ahead and start doing heroin. He’s at that age where it just doesn’t fckn matter anymore.”

But through it all, it sounds like King wouldn’t mind going back to the tobacco.

“You know, people give me great credit,” King said, via the Cliff Edge in 2014. “I won a Lung Association award as a celebrity non-smoker, but to tell you the truth, if I hadn’t had the heart attack, I would never have stopped. I liked the feel of it, the taste of it. I didn’t wake up in the morning coughing. I didn’t hack. I wasn’t one walking around saying, ‘Jeez, these terrible things.’ I loved every drag I ever took.”

Except, obviously for the one just captured on video.