Former LAPD cop and current fugitive Christopher Dorner is being hailed (or vilified) as "Chocolate Rambo."

As the “Christopher Dorner versus the cops” saga plays out in southern California, Dorner continues to gain outright fans and reluctant admirers all across the Internet. And now he’s also inspired a potentially bizarre new meme: Dorner as “Chocolate Rambo.”

So far, it hasn’t only been the usual anti-authoritarian types sympathizing with Dorner. Ever since the manhunt for Dorner began, police throughout southern California have angered the public through a variety of well-publicized actions, ranging from unconstitutional house-to-house searches to shooting innocent pickup truck drivers, including two newspaper delivery women
and a would-be beachgoer. One SWAT team launched a predawn raid on a San Bernardino apartment complex; elsewhere, police surrounded a home improvement store and refused to let customers leave until they determined Dorner was not inside.

These and other incidents inspired the Christian Science Monitor to run an article with the understatement headline “Hunt for Christopher Dorner becomes major [public relations] problem for LA police.” 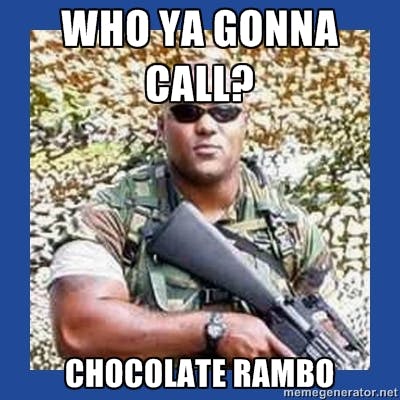 Still, for all the Dorner fans to be found online, there are also people who condemn them and Dorner too, as an unmitigated criminal. Where the new “Chocolate Rambo” meme is concerned, it can be hard to tell which motivation is at play. Depending on the context, a name like Chocolate Rambo could be an admiring, complimentary nickname or an obnoxious racist sneer.

The phrase is clearly meant contemptuously on Encyclopedia Dramatica—but then, so is everything on that site.

When the Huffington Post wrote an article about Dorner’s hero status among people concerned with police brutality, it Tweeted a link to that story along with the admiring quotes  “’Chocolate rambo,’ ‘black guy of the year,’ ‘Dark Knight,’ ‘policeman of the year’ – alleged cop killer #ChrisDorner http://huff.to/12zJcmk”

More ambiguous is “Chris Dorner: Chocolate Rambo,” a YouTube video which at first appears to be a sincere, if breathlessly over-the-top, expression of admiration for “the man who destroyed his own getaway vehicle to stop the violence against newspaper delivery women driving similar trucks; the man whose shooting sprees aren’t against school children or movie theaters; the man who inspired Jason Bourne, Robin Hood, and Jesus Christ before he even existed – Mr. Christopher Jordan Dorner.”

Sincere or sarcastic? It was posted “in response” to this much longer video by LJRTV, called “Official Christopher Rambo Dorner Story” with a definite anti-LAPD slant.

Posting a link to the Chocolate Rambo video was enough to get one user temporarily suspended from the Something Awful discussion forums.

MemeGenerator shows 17 pictures (as of this writing) wearing the Chocolate Rambo tag, though only one showed up on a Quickmeme search for the phrase: a picture of Dorner captioned “They drew first blood. Not me.”

Even taking the ambiguously toned pieces under consideration, it still appears that a search for “Chocolate Rambo” yields more sincere Dorner admiration than anti-Dorner sneers. But even that admiration may come with an edge. 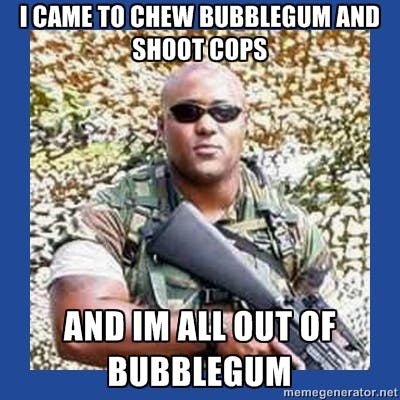 Thread participants suggested this anecdote shows Dorner was a good cop who snapped because he couldn’t handle working for such a corrupt police system. Indeed, many Dorner supporters seem to share that view to some extent. But another poster on Facepunch offered an alternate theory: