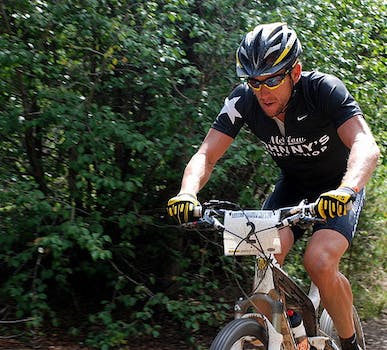 Lance Armstrong might have left it all on the table, but he will never be able to shake the YouTube videos of him vehemently denying the use of performance-enhancing drugs.

While disgraced cyclist Lance Armstrong may have left it “all on the table” during an interview with Oprah (set to air Thursday), he will never be able to shake the YouTube videos of him vehemently denying the use of performance-enhancing drugs (PEDs).

Since winning the Tour de France in 1999, Armstrong has denied using PEDs at least five different times in interviews and press conferences. He even made a reference to the rumors in a Nike commercial.

“This is my body and I can do whatever I want to it,” Armstrong says in the ad that aired in 2001. “I can push it. Study it. Tweak it. Listen to it. Everybody wants to know what I’m on. What am I on? I’m on my bike busting my ass six hours a day. What are you on?”

On Oct. 22, the Union Cycliste Internationale (UCI) voted to ban Armstrong from professional cycling for life and stripped him of his seven Tour de France titles. The motion came as a result of a USADA report that Armstrong had used performance-enhancing drugs throughout his career.

Armstrong’s interview with Oprah will be his first since his fall from grace. The talk-show host reportedly asked him more than 100 questions.

“He also is expected to deny that he forced his teammates to dope along with him, pointing out that some U.S. Postal Service riders used performance-enhancing drugs before they joined the team,” the Washington Post reported. “And according to a personal familiar with the conversation, he’ll confront USADA’s portrayal of him as a vindictive thug, a characterization underscored by video clips Winfrey shows him of hostile statements he made about those who questioned his claim of competing clean.”

Since his rise to the top of the cycling world, Armstrong has bullied those accusing him of using PEDs, and even sued England’s The Sunday Times for libel.

During a 2004 press conference, Armstrong proclaimed, according to a timeline by the Los Angeles Times, “We’re sick and tired of these allegations and we’re going to do everything we can to fight them. They’re absolutely untrue.”