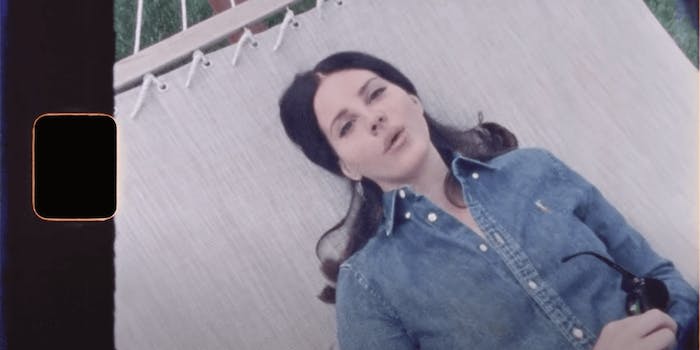 'The fact they want to turn my post, my advocacy for fragility, into a race war, it’s really bad.'

Lana Del Rey shared an open letter on Instagram last Friday slamming critics who say she “glamorizes abuse” while invoking the names of several other female musicians, many of whom are women of color. On Monday, she responded to the widely criticized post with a freewheeling, six-minute video that touches on pole dancing, Marianne Williamson, and Native American reparations.

“Hey, so I don’t wanna beat a dead horse, and I don’t wanna go on and on about this post thing,” Del Rey said in the new video, “but I just wanna remind you that in that post, my one and only personal declaration that I’ve ever made—thanks for being so warm and welcoming—was about the need for fragility in the feminist movement. It’s gonna be important.”

Del Rey attempted to clarify her previous comments about other artists who “have had number ones with songs about being sexy, wearing no clothes, f*cking, cheating etc.” She reiterated her previous statements saying there is a double standard in the music industry––once again using a woman of color to prove her point.

“The difference is, when I get on the pole, people call me a whore, but when [FKA] Twigs gets on the pole, it’s art. So I’m reminded constantly by my friends that, lyrically, there are layers and complicated psychological factors that play into some of my songwriting, but I just wanna say the culture is super sick right now, and the fact they want to turn my post, my advocacy for fragility into a race war, it’s really bad,” she said.

That’s when the singer started going off in odd directions with her speech.

“I was talking again about the idea of how important it is to make reparations for me to the Navajo community because they touched me so much in my youth, and that I believe in personal reparations because it’s the right thing to do,” the Norman Fucking Rockwell! singer continued. “You know, when Marianne Williamson was talking about reparations to the Black community that never got done during the emancipation period, that was why I liked her, ‘cause I always felt that way.'”

Del Rey said she was speaking up for women whom she felt did not have a place in society or within the feminist sphere and insisted that her Friday post was not racist.

“I just wanna say to all of the other women out there who are like me—good girls, good-intentioned, who get f*cked up the a** constantly by the culture, just because you say what you really mean—I’m with you and I feel for you, and I know that you feel for me,” she said. “I’m super strong, you can call me whatever. I’m sorry that I didn’t add one 100% caucasian person into the mix of the women that I admire. But it really says more about you than it does about me.”

Del Rey insinuated that she heard backlash from at least one of the women she mentioned her post, which included Doja Cat, Ariana Grande, Camila Cabello, Cardi B, Kehlani, Nicki Minaj, and Beyonce.

“I’m sorry that a couple of the girls I talked to who were mentioned in that post have a super different opinion of my insight, especially because we’ve been so close for so long,” she said. “But again, it really makes you reach into the depth of your own heart and say, ‘Am I good-intentioned?’ And of course for me, the answer is always yes.”

Del Rey also snuck the title of her new album into her video. Chemtrails Over the Country Club comes out Sept. 5.

The singer signed off her video with a reminder to her fans and a suggestion for her haters: “I’m not the enemy, and I’m definitely not racist, so don’t get it twisted. Nobody gets to tell your story except for you, and that’s what I’m gonna do in the next couple of books. So God bless, and, yeah, f*ck off if you don’t like the post.”