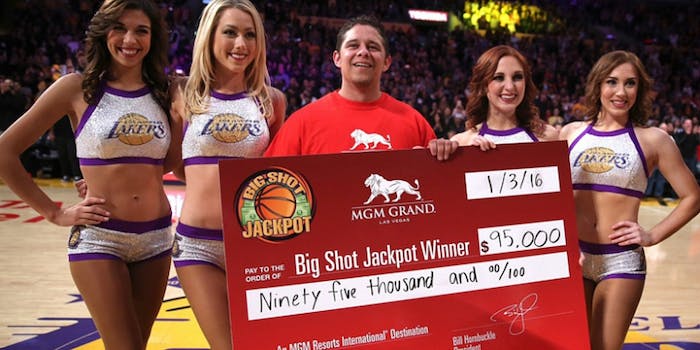 Sinking basketball shots in a timely and clutch manner usually earns one riches and fame. You can spend your entire life honing your craft to get through college and into the NBA, where contracts worth tens of millions of dollars await you. Or you can go the easy route and just get kind of lucky in one all-important moment.

Meet David Moya, a Lakers fan who attempted a half-court shot at the Lakers game on Sunday. The prize: $95,000. The result…well, just watch.

It’s a good thing Moya was the one to take the shot. He originally wanted his fifth-grade son Christian to do the honors. Instead, Moya got to show off his skills in front of nearly 19,000 people.

“I didn’t think I had a shot, really,” Moya told NBA.com. “So I just went out there and threw it up.”

Surely winning a nearly-six-figure prize is better than winning free tuition for a semester. But this isn’t the best prize we’ve ever seen for sinking a lucky shot. Because while winning $95,000 is fantastic for doing 5 seconds of work in front of thousands of cheering fans, it doesn’t compare to the guy who hit his half-court shot at a Memphis Grizzlies game two months ago. That dude won free tater tots for life.