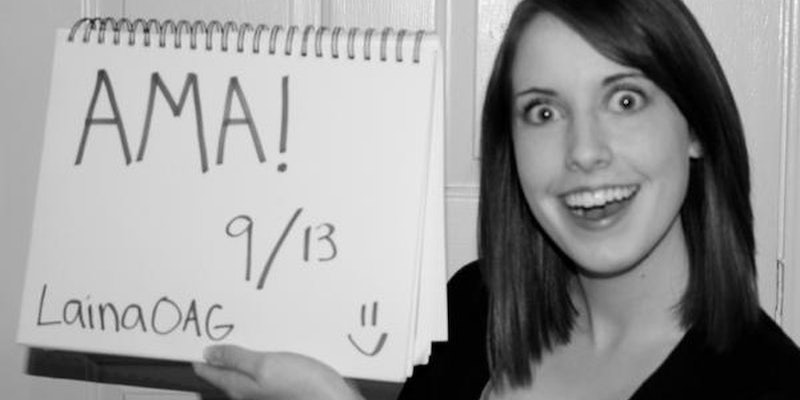 The YouTube sensation was barred from Reddit's /r/IAmA due to a rule that discourages "memes" and Internet celebrities from answering questions there.

Laina is no stranger to YouTube; her videos have been viewed over 40 million times ever since she made an intentionally-creepy video for a Justin Bieber fan contest and became an Internet celebrity. She even holds Q&A sessions on her YouTube channel. But earlier today she decided to do her first ever AMA (Ask Me Anything) on Reddit.

Everything did not go as planned. By answering questions in /r/IAmA, Laina apparently broke one of the rules of the subreddit, and her interview session was shut down after just a handful of answers.

“Hey [Laina], Your post was removed from /r/IAmA. As a rule, we don’t allow posts about internet experience/meme fame. As when Bad Luck Brian did an IAmA, the mods in/r/AdviceAnimals would love to have your thread there. Sorry for the inconvenience!”

Laina is new to Reddit—she only joined today in order to do the AMA—but other redditors were quick to complain to SupermanV2 about the subreddit guidelines.

“Although I respect the rule, but why was it there anyways? She’s not a meme, she is a very well known Youtuber more or less,” Wasoomi said, arguing that Overly Attached Girlfriend is a YouTube celebrity like Philip DeFranco, who completed his third AMA this past Wednesday.

Redditors were also quick to point out that Zeddie Little, who rose to Internet fame as the Ridiculously Photogenic Guy, did an AMA a few months back without having his post removed by a moderator.

Much of what SupermanV2 said was downvoted by other redditors, so he took to another thread in /r/SubredditDrama to answer questions people had about the decision and the guidelines of /r/IAmA.

“Being a mod is neither as easy, or as cut and dry at is appears from the outside. A lot of the time it’s a judgement call. I knew making this call would create a fuss similar to the S_W debacle. But rules are rules,” SupermanV2 wrote.

He also clarified that the /r/IAmA moderators came to a group decision on guidelines, and he wasn’t around for the Little AMA so he couldn’t speak about that.

Laina, however, seemed to take it all in stride.

“The AMA was removed? Guess I don’t understand how to use Reddit. Sorry, guys! It was fun,” she tweeted.