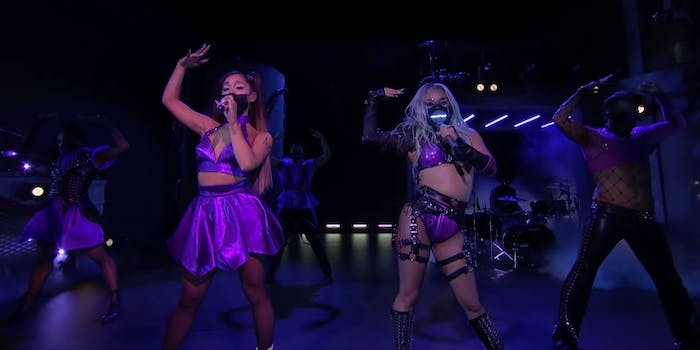 Lady Gaga won the VMAs in a parade of masks

She also won the most awards of the night.

Lady Gaga may have walked away with the most Moonman statues at Sunday night’s eclectic MTV Video Music Awards, but her many, many masks were the real winners of the night.

Even before the VMAs aired, it was apparent that it wouldn’t be business as usual for the awards show that thrives on spectacle. Some artists like BTS prerecorded their performances while others performed live in several different locations throughout New York City. The artists didn’t perform in front of live audiences, and some of the night’s winners accepted their awards from home.

Lady Gaga, who put on a nearly 10-minute medley of songs from Chromatica, went all out, but more significantly, it also made use—and made art—of the mask. Everyone, from Lady Gaga and Ariana Grande (who joined Lady Gaga on-stage for “Rain On Me”) to the backup dancers and musicians involved wore a mask, regardless of their distance from one another. Lady Gaga’s performance mask, which was described as a “custom sound reactive mask” by mask designer Diego Montoya, moved with every note that Lady Gaga uttered, which gave her performance a very cyberpunk feel.

The end result? It’s every bit the spectacle you’d expect from a Lady Gaga performance, but with the addition of masks, there’s a noticeable effort to protect everyone involved. It’s an inventive way to both keep all of the performers safe, make art with the masks, and could potentially be a factor in revamping the concert experience in a COVID-19 world.

And Lady Gaga didn’t just use the mask visual during her performance to promote wearing masks. During her medley, she urged people to “mask up.” She changed her outfit (and mask) with each VMA that she won. As the night went on, she continued to urge people to wear masks.

Many took Lady Gaga’s message to heart, using her performance to point out that if Lady Gaga and Grande can perform in masks, then we can handle more menial tasks in them.