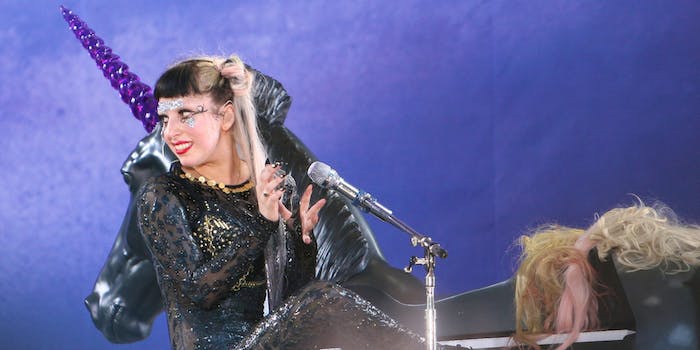 Lady Gaga: Iconic pop star, Hollywood actress, and queen of rocking pink cowboy hats. You know her, you love her, and you wonder how she could possibly get more talented. She’s even inspired tons of memes, many revolving around her dazzling performance in A Star is Born.

Now we can add one more ability to her seemingly never-ending list of interests: Gaming.

On Saturday, Gaga tweeted a relatable message about playing the 2009 PlatinumGames hack-and-slash game Bayonetta. “When you beat Chapter IV of Bayonetta and then realize Chapter V is going to kick your ass,” she lamented with a skull-and-crossbones emoji and teary laughing face emoji. She added the hashtag #gamergirl and “THE SHADOW REMAINS TOUGH!!!!!” with plenty of exclamation points for good measure.

So, for the “shadow remains tough” bit, that’s actually incorrect. Gaga, we love you and all, but the voice is saying “The shadow remains cast.” It does sound a bit like “tough,” though. The voiceover happens when, after you decide to continue after falling in battle, you confirm “Yes” at the “Continue?” screen.

Bayonetta is a gorgeous and frenetic action game where players take on the role of the titular character, an Umbra Witch, who actually has quite a bit in common with Mother Monster. The two are sexy, theatrical, and sometimes over-the-top, so it’s perfect that Bayonetta is the game Gaga chose to tweet about playing to her fans.

Nintendo was quick to get on the Gaga gaming train, with words of encouragement from the official Nintendo of America Twitter account.

With a vote of confidence from Nintendo, you can do just about anything. And given the fact that its official U.S. account replied to her, Nintendo must have assumed she was playing the port of the original Bayonetta on Nintendo Switch instead of on Xbox 360 and PlayStation 4.

But while Gaga vanquished Bayonetta’s Chapter IV, the real winners here, as we can likely all agree, were the fans. The memes flowed in immediately.

Now.. all Lady Gaga has to do… Is cosplay Bayonetta. On stage. Live.

You're so much more of my fucking queen now!! ♡

This is the greatest day of my life pic.twitter.com/d8W08XtlGh

she only plays to the best videogames pic.twitter.com/l27E364lb6

Lady Gaga playing Bayonetta makes so much fucking sense, it’s awesome. Be sure to play the sequel too! Both are really good

What more can we say? Gaga’s a legend, and of course she’s a Bayonetta fan.

We stan a gaming pop queen.