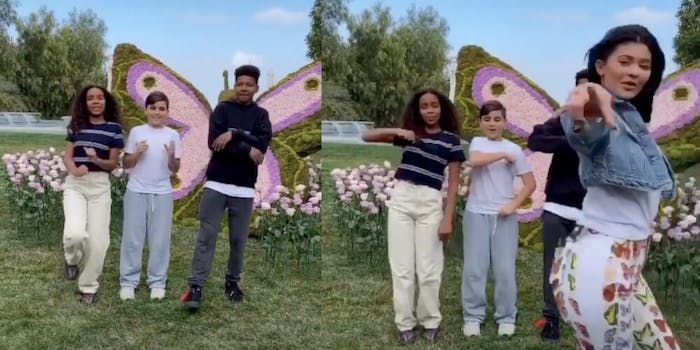 Kylie Jenner dances with the tweens, including nephew Mason Disick, in a TikTok video.

Kylie Jenner had a blast with the kids at the Kylie Cosmetics Stormi Collection launch party. The 22-year-old beauty mogul appeared in a TikTok with nephew Mason Disick, along with friends Jaide and Jayden.

In the video, Mason Disick, Jaide, and Jayden can be seen dancing to “Out West” by JACKBOYS in front of a giant landscaped butterfly in honor of the Stormi Collection launch. Jenner makes a quick appearance, dancing backward in front of the kids while pointing at the camera.

The TikTok was posted on @jamminjaide‘s account, where she tagged @jayden.alexanderrrr, @kyliejenner, and @mason_disick. However, Disick’s TikTok account appears to have been suspended due to “multiple Community Guidelines violations.”

Though Jenner does have her own TikTok account, @kyliejenner, with an impressive 1.6 million followers, she mostly posts about Stormi and Kylie Cosmetics, she doesn’t appear in many dance challenges or funny duets.  So fans were ecstatic to see Jenner appear in the video.

“IS THAT KYLIE say sike rn,” one user commented.

Another posed the question we’re all wondering: “How is this not viral yet?”

The Stormi X Kylie Cosmetics collection launches in two days, and Jenner has been promoting it on her Twitter and Instagram.

The launch party was an Alice in Wonderland-esque dream. There were butterflies and flowers everywhere, a tea party, and of course, a first glimpse at the Stormi collection.

Hopefully, TikTok will get to see more Jenner and Stormi content, as fans are clearly loving it.