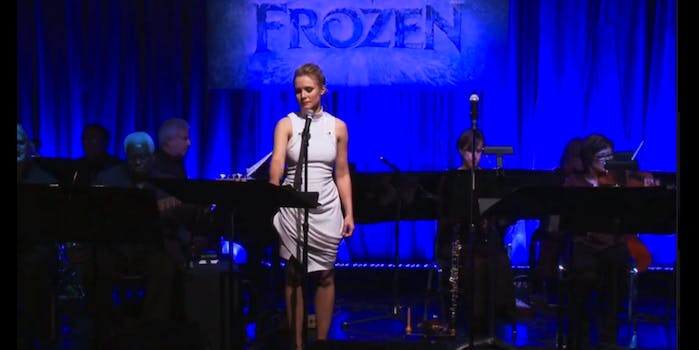 Kristen Bell performs every part of ‘Do You Want to Build a Snowman?’

What can't she do?

Idina Menzel might have been the breakout star of Frozen, but she’s not the only multitalented voice in the cast.

Actual Disney Princess Kristen Bell performed songs with the rest of the Frozen cast at a private concert in February, and in a video that recently made its way on YouTube, she told the audience about being able to shape her character into a heroine she wanted to see when she was 5.

She launched into a performance of “Do You Want to Build a Snowman?,” and not only does she perform her part of the song, she also embodies the two younger versions of Anna. If you didn’t know any better, you’d have thought she did all of the voices in the film.

If this isn’t a convincing argument to let Bell reprise her role on Broadway, I don’t know what is.

And if you can’t get enough of Bell, here’s her equally awesome duet of “Love Is an Open Door” with Santino Fontana.