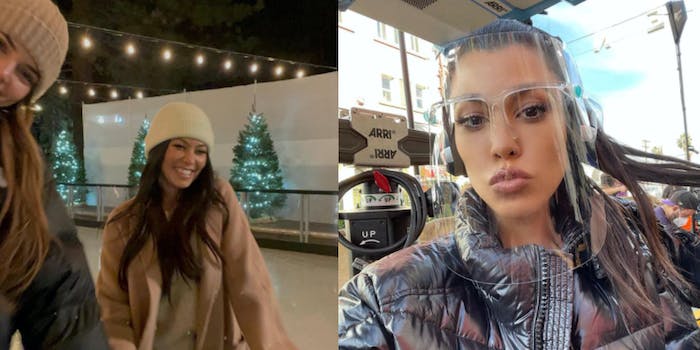 A Kardashian representative shut the speculation down.

Kim Kardashian West posted a photo featuring some Kardashian-Jenner family members in Lake Tahoe, California, to Instagram with the caption “Tahoe w the fam.” However, the photo left many wondering if Kourtney Kardashian was actually in Tahoe with the fam.

That isn’t what people are caught up on, however. Many are speculating that Kourtney was Photoshopped into the photo. “Is it just me or does Kourtney look like a cardboard cut out in this pic?” one commenter wrote.

Gibson Johns, host and producer of the We Should Talk podcast, reposted the family photo to Twitter, where speculation continued. “I think we can all agree that Kourtney was photoshopped into the latest Kardashian family photo,” Johns wrote.

Thousands began analyzing the photo. Some think the lighting in the photo is off, giving the famous family a strange appearance. Others agree with Johns and think Kourtney is definitley Photoshopped in. Some, however, are suggesting they are all Photoshopped into the photo.

“I mean they literally all look photoshopped,” one person replied, with zoomed-in screenshots of Disick and Kendall. Another claimed that Kourtney looked like a hologram.

“She was NOT photoshopped in…it’s the lighting, it’s backlit,” the representative wrote in an email to Page Six.

This isn’t the first time the Kardashians have been accused of using Photoshop. Back in May, Kardashian West’s followers noticed an extra hand in a campaign shoot promoting a new product. Kylie Jenner even deleted a photo after being accused of Photoshopping her body, resulting in the edge of her pool being distorted. She later reposted the image sans editing fail.