The ambivalence of digital detox

Why do we want to be so connected? And what do we gain from disconnecting?

That’s something a smoker told me many years ago, back when people actually smoked indoors. When she was alone she simply lit up. Then she could sit, looking off into the distance, inhaling, exhaling, blowing smoke, and tapping the ashes, etc. It made her feel like she had something to do; like she was not alone.

Of course now people don’t need to hold cigarettes to stave off that feeling of aloneness. Instead, they have another, allegedly less toxic habit: cell phones, tablets, and computers.

I admit it. If I’m at a restaurant and a friend gets up to go to the restroom, I whip out my phone and check my email. If I’m on the bus, I like some Facebook posts and check out my Instagram feed. Maybe send out a quick tweet, too.

Because when you have your cell phone, you’re never alone. Right?

I still find it disturbing, though, when I’m at a restaurant and I look at the table next to me and see a couple— sipping wine, facing each other, both completely engrossed in the tiny screens held in their free hands.

The other day, I was riding my bike to a doctor’s appointment and listening to the radio through my nifty Bluetooth headset (because apparently I can’t even ride my bike without multitasking). On came a familiar voice: that of my friend and former colleague Tanya Schevitz, who now works for Reboot, a Jewish group that spearheads the National Day of Unplugging.

And still I felt the tug. The irony was not lost on me that I was thinking about checking my Facebook and Twitter, while listening to my Bluetooth, while I was on my bike. Of course I was simultaneously agreeing with just about everything she (and the other guest, Ben Hanna of Digital Detox) was saying on the KALW show about the effects of digital overload.

Yes, I’m on too much. Yes, I need to disconnect. Yes, I need to find a better balance. Yes, it’s true that when  my partner suggests I put down my phone so I can pay more attention to the person in front of me, I usually reply with, “Huh? Were you talking?”

Can you really blame me? Or yourself? Using our devices actually leads to physical pleasure, with a dopamine release.

You know how sometimes you wake up in the morning and you’re feeling glum, even after your second cup of coffee? Then you go online and suddenly you just feel better. Connected. Like you’re really part of something bigger. A community. A world. Because you are.

Is it real? Harder question. I think so. Many of my so-called virtual friends aren’t really virtual. They’re real people, with whom I communicate through this medium of screens and pixels. There are also people who I  almost never see in physical space. Do I care about them? Yes. Do they care about me? I think so. 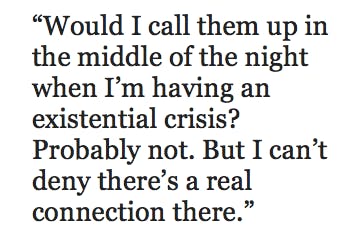 Would I call them up in the middle of the night when I’m having an existential crisis? Probably not. But I can’t deny there’s a real connection.

This is why I always have trouble writing about this topic. On one hand I want to say, let’s all disconnect and be in the “real world.” On the other, I think, this Internet thing? This is also the real world. Can both be true?

To be fair, Hanna and Schevitz were far from saying we should throw our phones away and abandon the online world. They were making very reasonable suggestions about taking time off of from the online world and paying more attention to what’s in front of us. Instead of looking at the phone, look at the trees. Instead of picking up a call when you’re with someone, turn it off.

But the reason we all want to stay connected online is because that’s where our friends are. That’s where we can build ourselves up into brands, raise our Klout scores.

When you disconnect, maybe you miss a show or a wedding or a party or a job announcement. But then again, maybe you’ll find that when you stop shoving information into your brain, it has a chance to breath and you think of the next great thing.  Maybe your kid talks to you about something important. Maybe you feel a little calmer. Maybe you sleep better.

A few weeks ago I took an enforced break from social networking. And guess what? I missed it. I missed my life online. Because it is real life. But I also got some much-needed rest.

If you’ve figured it out, let me know.

You can reach Janet Kornblum through Facebook, Twitter and email ([email protected]) to name a few. She’s probably online, waiting for your response.