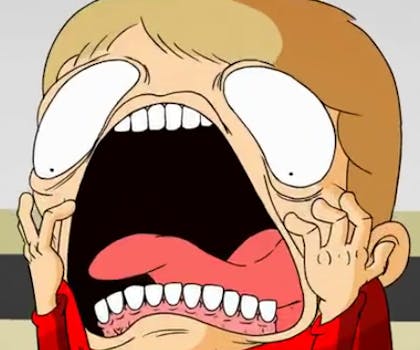 If you thought "Kony 2012" was too long to watch, you'll love this summary and critique.

We all know that “Kony 2012” was the biggest thing to happen on the Internet. But put your hand up if you actually sat and watched all 29 minutes and 59 seconds of the documentary about Ugandan guerrilla leader Joseph Kony.

Right, thought so. Well, here’s the solution: a one-minute version created by animators Zach Handel and Chris O’Neill, the team known as Psychic Pebbles, who have perfectly illustrated the Kony 2012 madness in a video uploaded Friday.

Psychic Pebbles’ critique was the most-viewed video on YouTube over the weekend, collecting 1.7 million views.

The original film has ostensibly been viewed more than 85 million times to date in three weeks. But was it viewed all the way through every single time?

YouTube’s FAQ is vague on this point, but the video site implicitly acknowledged it had been counting partial views when it changed its algorithm to disfavor videos which are only watched for a short amount of time—like the content-light response videos by scantily clad young women known as reply girls.

No wonder Psychic Pebbles’ eminently more watchable summary and critique rocketed to the top of the site. It also drew more than 12,000 comments, most of which philosophized on the state of first-world aid to developing countries.

As support for the Kony 2012 cause rolled in, so did the criticism for the truth-stretching film created by a nonprofit Invisible Children. The group’s founder, filmmaker Jason Russell was arrested after a public meltdown which his associates blamed on “dehydration.”

They shouldn’t let Russell watch this dark and stylistically grotesque critique, either.

“The Kony 2012 video made it worse for the suffering Africans, ‘cause now no one will want to donate money﻿ to any organizations,” wrote Icureditwithmybrain on YouTube.