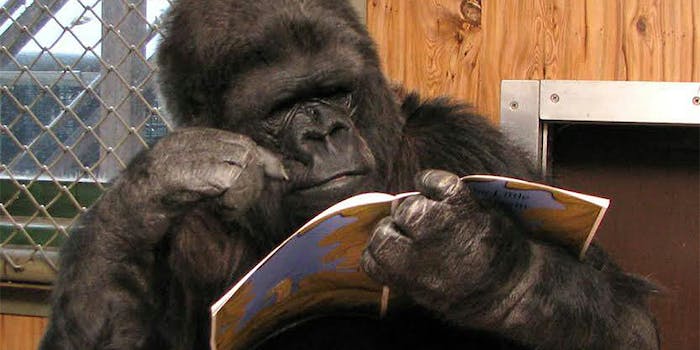 Koko the gorilla has died at 46

Koko was an amazing animal who inspired millions of people.

Koko, a female western lowland gorilla, famously known for learning sign language and caring for kittens, died in her sleep on June 19 at the age of 46.

Her full name was Hanabiko, (花火子) which means “firework child” in Japanese—a reference to her birthday on July 4, 1971.

Koko was born at the San Fransisco zoo. She was around one year old when Dr. Francine “Penny” Patterson, an American animal psychologist, began teaching her sign language. In 1976 Patterson formed the Gorilla Foundation in order to purchase Koko and continue her research. Koko spent the remainder of her life at the foundation located in Woodside, California.

According to her caretakers, Koko was able to understand over 2,000 words of spoken English, and was able to make over 1,000 signs in a modified form of American Sign Language that Patterson called “Gorilla Sign Language”.  She also occasionally created her own signs, once combining the sign for “bracelet” with the sign for “finger” to indicate “ring”. Estimates put her IQ somewhere between 75-95. For comparison, the average human IQ is between 85-115.

In 1984 Koko also famously adopted a kitten she named “All-Ball” and treated it as a baby Gorilla. At some point, that kitten escaped the enclosure and was struck by a car. Koko had several other kittens in her life, including ones she named “Lipstick” and “Smoky”. She has had two male Gorilla roommates. One named Michael (who died in 2000) also learned some sign language with Koko’s help. A second gorilla named Ndume lived with her until her death.

Koko’s story has been highly documented in both books and movies, and she met several celebrities throughout her life, including bass player Flea from the Red Hot Chili Peppers and comedian Robin Williams.

“Koko touched the lives of millions as an ambassador for all gorillas and an icon for interspecies communication and empathy.” The Gorilla Foundation said in a statement released yesterday that Koko was “beloved and will be deeply missed.”