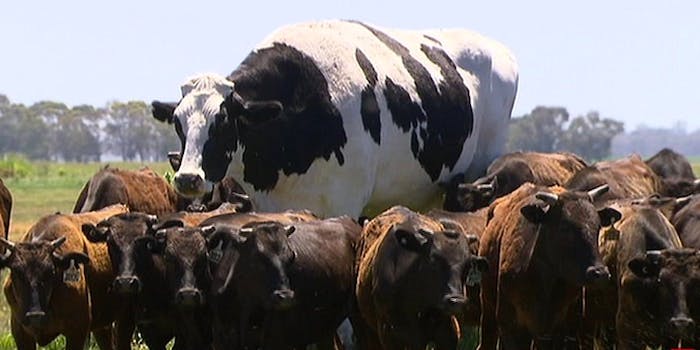 There are now memes about Knickers the steer being a meme

By now, you probably know about the Australian steer named Knickers. The 6-foot-4 male bovine was deemed too big to fit in the slaughterhouse, so he’s living the rest of his life on a farm and helping to look after the smaller cattle.

Knickers went viral in a big way on Tuesday after photos and videos of him towering over a group of young Wagyu cattle—which made him look ginormous in comparison—were shared on social media.

A particular photo of Knickers sticking out in the herd like a sore thumb is excellent meme fodder.

Me still trying to shop at Forever 21 pic.twitter.com/Cc60PVKfxq

The photo is also getting used as an object-labeling meme. Knickers represents anything looming over you, like anxiety or insults. The “large cow memes” themselves tower over other recent memes, like “they did surgery on a grape.” (FYI: Knickers is not technically a cow.)

Also, because it’s 2018, someone Photoshopped Gritty on Knickers.

HERE, TAKE IT YOU UNGRATEFUL SLACKERS, TAKE IT ALL pic.twitter.com/n5NKjFN6dc

Knickers, thank you for existing.