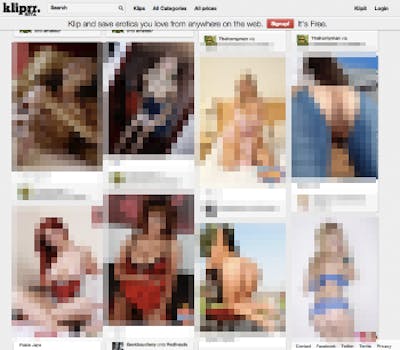 “Kliprr” sounds like your typical web-sharing site: “Klip” what you want from the internet, the name suggests, and share it with your friends. The Google results for “Kliprr” seem to confirm this, describing it as a site that “lets you organize, collaborate and share all the things you love from the web with others in a unique, vibrant, and colourful way.”

Click through, though, and you might be a bit surprised. Kliprr’s front page is smattered with graphic pornography, the headline revealing the site’s true nature: “Klip and save erotica you love from anywhere on the web.”

Interestingly, innocent categories like “crafts” and “animals” appear in a Google search for Kliprr, as well as in cached versions of the site. Was the “Pinterest for erotica” originally just another generic Pinterest competitor?

Kliprr isn’t the first attempt to create a “Pinterest for Men”, as other sites have come (and gone) in the same space. A similar site, Snatchly, signed up 15,000 users the first two months it launched. Sex.com, which sold for an unprecedented $13 million, turned itself into a similar style of site.