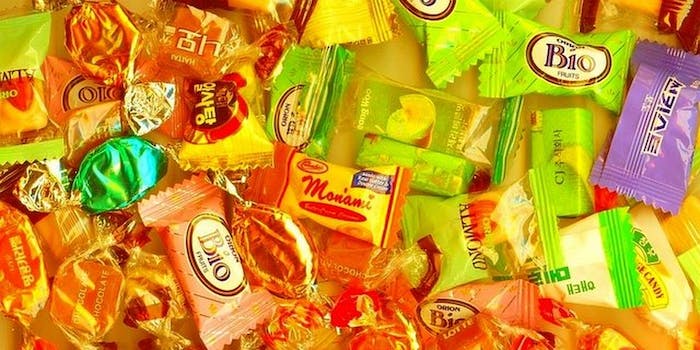 When they said, “The South Shall Rise Again!” it’s unlikely anyone was thinking about candy. But strangely, candy is precisely what the Ku Klux Klan has been using in its recruitment tactics lately.

As CNN reported this week, America’s oldest, most notorious hate group has been using sweets, in addition to spreading fliers, in an apparent push to get people to join up—and it’s been a fairly big push, too. Although the candy-giving was concentrated in Seneca, South Carolina, Klan literature and information of the same strain have shown up in states from New York to Texas, California, and beyond.

In the CNN piece, contributors Kristina Sgueglia, Marisa Marcellino and Ray Sanchez talked to experts who believe that “the Klan may be seizing on a moment when the issues of race and immigration are dominant in the national debate.” They further predict that “the group may be seeking to capitalize on growing racial tension to garner support.”

That the Klan is rearing its ugly head in an attempt to exploit America’s ongoing racial woes is unsurprising. They’ve always been around, however low their profile gets. However, their new strategies reveal just what an odd time it is for their organization—and why they’ve struggled to maintain a presence in an Internet-obsessed society.

While the Klan—thankfully—doesn’t make headlines on a regular basis, there have been several notable incidents in the last year or so which highlight their continued existence. They’re not especially active online, but occasionally, their name will pop up somewhere on the web. Of course, sometimes they pop up more as jokes than in legitimate news stories. A July petition calling for a “purge” of African-Americans ended up being a rather tawdry hoax. Real, but sadly no less terrible, were the Klan’s efforts in August to raise money for Ferguson police member, Darren Wilson, who was recently identified as the officer who shot Michael Brown.

A weirder story from earlier in the summer involved the unearthing of several KKK public access shows, which have made their way to the Klan’s website. These programs were chiefly led by a supposed Pastor named Thomas Robb, who has been a prominent leader in the KKK since the ‘80s. With the help of his family, Robb has targeted people of all ages with a bizarre kind of infotainment, examining news and pop culture as seen through the evils of problems like “race-mixing.”

As the Daily Dot’s Daniel Kibblesmith writes, “Reporters will often describe the Pastor and his family as media-savvy,” but Kibblesmith puts that in perspective: “Robb and his family have spent the past decade building a fairly robust, if technically inept, Web presence.”

Kibblesmith, who discusses the Robb family’s videos with an almost surreal kind of humor, warns that their obvious shoddiness isn’t any reason to dismiss the vitriol behind them. “Between these technical snafus, the low-budget quality of the videos, and the narrow cast of rotating characters, it’s tempting to see the modern Klan as more pitiable than dangerous,” he observes. “But dismissing any incarnation of the Klan as a joke seems short-sighted, especially in an era where the Internet’s ability to radicalize individuals, especially young people, can’t be overstated.”

Kibblesmith makes an excellent point: Hatred is hatred is hatred. This harkens back to a Rolling Stone piece from June, which profiled the work German neo-Nazi groups are doing to essentially rebrand themselves for an Internet-friendly world, reaching out through social media and changing their look to come off less aggressive. Many of these young white supremacists are smart—and quite tech savvy. However, their core message is no less alarming.

There, too, has been talk about whether the KKK is trying to rebrand. Following shootings at a Jewish community center and Jewish assisted living facility in April, CNN ran an article focused mostly on KKK “Imperial Wizard” Frank Ancona and his campaign to change the Klan’s image, particularly where violence is concerned. CNN’s Ashley Fantz relayed that Ancona “said he and those like him can spread that message without violence—a sort of rebranding of the Klan.” But here, Fantz asked the important question: “The idea may sound absurd, but is it conceivable?”

After talking to various rebranding experts, the answer CNN came up with was “no.” That didn’t stop the Internet, however, for making fun of them for even asking.

But despite the laughable earnestness with which CNN tackled this story, it’s worth asking, why have groups like the German neo-Nazis been so much more successful in changing their look, style, and general approach to fit the digital age, without losing their hideous heritage? Hate crimes in Europe are in fact on the rise, yet Germany’s neo-Nazis are better at deflection than the current iteration of the Klan is.

Fantz hypothesizes, “From a sheer marketing perspective, the lack of central leadership poses more problems for the KKK if it’s serious about revamping its image.” This disorganization was on full display with their handling of the Ferguson incident. The warring factions within the Klan have reached such an inability to communicate that the Frank Ancona suggested that the Wilson fundraiser was a scam.

And that’s not even the worst of the of the recent instances detailing the Klan’s ineptitude. In what has to be the most fascinating part of Fantz’s article on Ancona, she mentions a 2013 Memphis rally where one group of Klansmen actually showed up to protest each other.

It appears that as opposed to using the Internet to rally themselves under defined mechanisms, the KKK has instead succumb to the perils of its vastness. Yes, they have a website, a Twitter account, and a Facebook page, but they don’t have any idea what to do with that. They’re aware of social media, they’re on it, but the ever-expanding complexities of the Web have left them too confused to use technology as a legitimate recruitment tool.

This fits in perfectly with their current mode of ramping up. Think about the way in which the Klan’s recent output has manifested. CNN reported that “packages appear to be part of a wider recruitment effort by the Klan across the country” and that “similar fliers have turned up in dozens of U.S. cities over the past six months.” That sounds pretty impressive, until you consider how many cities you can reach with a few emails (i.e., a lot more than a dozen). And with the money that the Klan is spending on physical packages, they could be heightening their Web presence, and reaching a lot farther for the same price.

Maybe in a time where prejudice is prevalent everywhere on the Internet, American bigots no longer feel the need to belong to a specific organization to express their detest. From certain corners of Reddit to an utterly ridiculous amount of racist behavior on YouTube, it only takes so long for a comment section on something completely unrelated to devolve into a bevy of slurs and hate speech.

With the way factions like the MRA movement have built strong apparatuses using online communities, we should all be thankful that the KKK has yet to really discover the power of the Internet. Anyone that tells you we don’t have a problem with racism in America is either an idiot or willfully blind. The Klan may be weakened, desperate, and pathetic, but that doesn’t mean their ideals aren’t very real to them. And as we watch their reach dwindle in real life, we should be mindful that their grassroots campaigns don’t invade the web, the way so many others have.