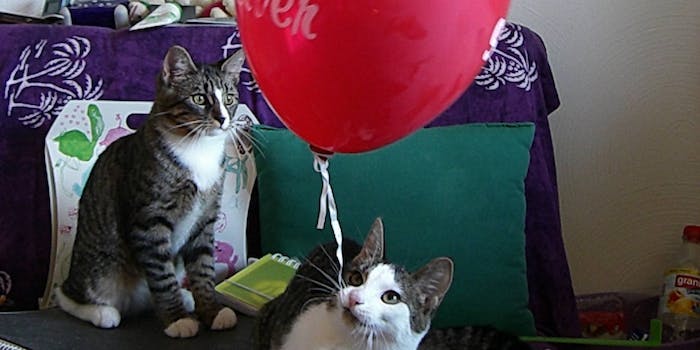 When it came time to surprise her husband for his birthday, Kara Osbak had a clever idea. The loving wife planned to inflate a few dozen balloons and then rain them down on the birthday boy as he exited the bedroom.

But Kara wasn’t the only one with a plan for those colorful inflatables. Jeff, the couple’s curious tabby cat, decided to jump in on the fun and ended up becoming a gigantic party piñata in the process. Thanks to a little static electricity the 8-month-old kitten soon found himself covered in a coat of balloons that he couldn’t shake.

After enjoying a few laughs at the cat’s expense and snapping priceless photos Osbak and her husband removed the balloons so the cat could be free from static cling. Surprisingly, the cat remained calm and kept his sharp claws in check. “He just chilled through it all,” Osbak wrote.