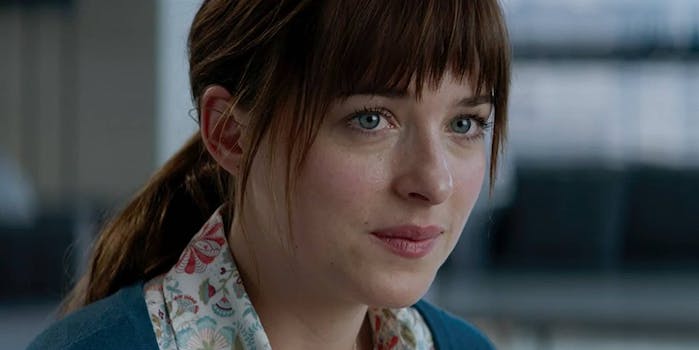 Is kinkphobia behind the widespread criticism of ‘Fifty Shades of Grey’?

I can’t help but feel that some of the outrage over 'Fifty Shades' is both selective and elitist.

After nearly three years of writing about kink, feminism, and pop culture, I’m so tired of talking about a certain novel that I now make a point of only referring to it as “that book.”

Criticizing Fifty Shades of Grey on either feminist or literary grounds is pretty much like shooting gray-eyed fish in a barrel. Having re-read it recently, I can certainly offer no defense of its style, characters, plotline, or its relationship with reality.

Where I am going to defend both the book and the movie, however, is on the charge that the key relationship is bad for women. Many people believe that that this fairly vanilla story is a romanticized tale about an abuser named Christian Grey and a battered woman named Anastasia Steele. This week, for example, critic Erin Gloria Ryan wrote on Jezebel that 50 Shades of Grey “glorifies the sort of domineering masculine violence that lands women outside of [author E.L.] James’s jill off fantasyland in the hospital, in domestic violence shelters.” Emma Green at the  Atlantic said the sex in the story feels abusive because “sometimes, Ana says yes to sex she’s uncomfortable with because she’s too shy to speak her mind, or because she’s afraid of losing Christian.” Other people have argued that Fifty Shades’ popularity will lead to a spike in domestic violence.

While it’s a not great book by any means, I feel like Fifty Shades has gotten an unfair amount of flack. As someone who has read a fair bit of kinky literature, I believe we need to be wary of cherry-picking decontextualized instances from one book, while ignoring all others. In the same breath that critics condemn Fifty Shades, some point to the 2002 film Secretary as a positive alternative—but that film has its own lack of negotiation, lack of explicit consent, and dodgy power structure where a boss uses his position to dominate an emotionally vulnerable female subordinate. Where is the condemnation of Mr. Darcy, Mr. Rochester, and Heathcliff—those heroes of romantic literature—for being emotionally and sometimes physically abusive sociopaths?

I can’t help but feel that some of the outrage over Fifty Shades is both selective and elitist. Fifty Shades faces the same kind of criticism that’s lobbed at romance in general: “Oh, look at those uneducated women and their trashy reads! Bless them for not knowing that classier books exist!” I wonder if many critics care less about misrepresentations of kink in the book and more about saving the undiscerning masses from themselves.

Like the book, the film takes a good while (nearly an hour) before we get to anything sexy. Until then, it’s a pretty standard romance. I agree with other reviewers that Dakota Johnson plays Anastasia with spirit and attitude, giving what is a bland and often deeply unrealistic character some actual edge. As a result, it often feels like Ana is really the one in control, while Jamie Dornan struggles to inject much “domliness” into his role. Perhaps this is because dominance and submission are much more subtle and fluid concepts than those determined to see the movie as evidence of male coercion and female helplessness appreciate. This is an aspect of both the book and the movie that rarely gets mentioned: Christian Grey was not always a dominant and was in fact a sub in another relationship.

Some critics argue that the socioeconomic gap between the two characters lends itself to a power imbalance, but I believe that in both the book and the movie, Ana has more power than many critics give her credit for. (It’s also worth remembering that there was no uproar around the relationship between Carrie and Mr. Big in Sex and the City simply because he was rich and she was not, even though he was a right douche to her at times.) Grey’s lavish gifts (a first edition Thomas Hardy book, a MacBook, a car) and ridiculously grand gestures (helicopter rides, glider flights) don’t come across as threatening so much as just a bit desperate.

To me, the notion that the relationship must be coercive just because of Grey’s wealth is patronizing. In assuming Ana has no real agency, critics are not only imposing their own preconceptions about kink upon a fictional character but are also effectively labeling a woman who has a relationship with a man richer or older than her a brainless plaything.

Yet Ana’s own desire and excitement are regularly detailed in the book and film. Relatively early on in the movie, when Grey says, “I’m incapable of leaving you alone,” Ana answers simply, “Then don’t.” When he tries to imply she is too inexperienced to enter his world, she disagrees, saying, “Enlighten me, then.” When he describes how arousing he finds her—“I’d like to bite that lip”—she expresses her own arousal, saying, “I think I’d like that.” How many more explicitly spelled-out instances of consent and desire do viewers need before they’ll will stop disregarding the agency of the female submissive?

Concerned critics have highlighted Christian’s habit of following Ana as an example of dangerous and coercive behavior. Several of these scenes appear in the book, and although some of them are still present in the film, most of the time they feel to me to be more puppyish than threatening. As someone currently rewatching season 6 of Buffy the Vampire Slayer, I’d say the relationship between Spike and Buffy contains far more cause for concern (a sexual relationship between sworn enemies that regularly involves beating the crap out of each other) than Grey’s cow-eyed trailing of Ana.

Yet therein is the point: Both stories are ultimately meant to be enjoyable erotic fantasy fiction, not real-life relationships, and this needs remembering more often. Also, in the film, director Sam Taylor-Johnson works to deliberately remove some of the creepier undertones present in the book: When Christian shows up unnanounced in her room, Ana isn’t frightened or even that annoyed. Instead, she’s rather curious and aroused. Furthermore, in that scene—and, it’s worth mentioning, all other sex and kink scenes in the movie—the couple doesn’t do anything sexual without Grey asking, “Is this OK?” first and Ana answering clearly in the affirmative.

Another aspect of the movie that’s gone underdiscussed is its focus on safe sex. While most blockbuster films glaze over birth control in their sex scene, in Fifty Shades, we see Christian pause to put on a condom more than once. There’s also some very realistic awkward standing around while Ana waits for Christian to tie her up, showing that kink has its boring and practical bits. There’s a nod to aftercare—a very important concept in BDSM—when we see Grey tenderly carrying Anastasia away in his arms after their session, her wrapped in a fluffy robe.

Like many pop culture portrayals of kink, the trailers only show the Deadly Serious, Heavy Panting aspects of the movie. They don’t show Ana dancing dorkily for Christian in his living room, her laughing when she spanks him, or the first bondage scene being interrupted by the arrival of Christian’s mother (as someone who lived with their parents ’til way too recently, I can really relate to this). The gloss regularly put over this franchise prevents people learning about an important facet of kink—that it can be very slapstick and very funny. The Red Room of Pain is less realistic; even most kink clubs don’t contain as much high-end bondage equipment as Christian Grey’s leather-lined chamber, but I guess that’s what you get when you’re a 27-year-old millionaire.

Many people are still deeply uncomfortable with seeing a woman choose to be submissive and can’t help but assume a misogynistic man must have bullied her into it, hence the scramble to find examples of how this fictional relationship fits the template for domestic abuse while ignoring instances where Ana gives consent and enjoys the situation. Even though feminism challenges the assumption that nature slots male and female into neat dom/sub roles, there still seems to be an unease among feminists who feel that there is a base instinct in men to dominate women, which if allowed free rein via kink, will be dangerous to women. Why else would people be expending so much energy on arguing that the clearly educated and spirited young woman at the center of Fifty Shades is a naïve idiot? It’s just so retrogressive, not to mention patronizing to real-life female subs.

The current controversy over Fifty Shades brings to mind a good quote from Stacey May Fowles, a fantastic writer who discusses female subs from a feminist perspective. She said this to me when I interviewed her in 2012, shortly after the novel trilogy became so popular:

It is ultimately the responsibility of every viewer to educate themselves, and to think critically about what is performative artifice, what is mere entertainment, and what is not—not the responsibility of a handful of sanctioned subs and doms to censor and police the allowable construction and enjoyment of visual expressions and depictions (although I am loathe to say it, that goes for the likes of Fifty Shades of Grey as well).

If you want to hate this movie because it’s unrealistic, go ahead. There are plenty of eye-rollingly bad moments (I mean, how many 21-year-old college students with Internet access and very sexually active roommates really don’t know what a butt plug is?). If you want to hate it because it’s sappy and contains some terrible dialogue, be my guest. However, I think it’s seriously off-base to say that bit of spanking that’s been actively, repeatedly consented to is akin to the terrible violence perpetrated against genuine victims of domestic abuse every day.

This article was originally featured on Bitch magazine’s website and reposted with permission.