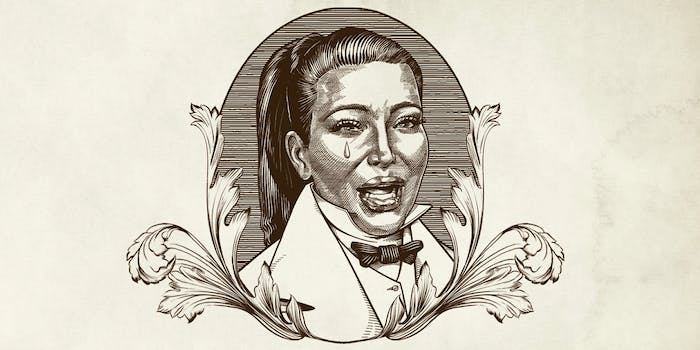 A Q&A with Twitter’s queen of contouring our existential plane.

With over 250K Twitter followers and more than 2,500 tweets, Kim Kierkegaardashian (@KimKierkegaard) has become something of a resident oracle for the social media platform. The account puts Søren Kierkegaard, the father of existentialism, in dialogue with the mother of fame for fame’s sake, Kim Kardashian West. Kim Kierkegaardashian borrows phrases from the pair, turning Kardashian dark and Kierkegaard bright. The result is funny as hell.

As we look back at 2018, Kim Kierkegaardashian—which was turned into a book over the summer—stands out as one of the best accounts on Twitter this year. The creator (who wishes to remain anonymous) recently talked to us about how the internet is changing, The Good Place, and the appeal of mashing up two markedly different people.

Daily Dot: Did you have a goal or intention with starting this parody account? How did the idea of a Kim Kardashian/Kierkegaard mashup occur to you?

Kim Kierkegaardashian: The name itself, “Kim Kierkegaardashian,” came to me first, and it instantly made me laugh out loud. The name was overpowering and seemed relevant, and it demanded to exist. And once I created @kimkierkegaard and started to put the name into effect, and create the voice—by combing bits of Søren Kierkegaard the 19th-century Danish philosopher with Kim Kardashian West the reality star—it just instantly worked.

It was as if these two disparate cultural figures had always been looking for each other, and now they’d finally found each other, and could say things like: “Glamor, menswear, top hat. . . I stick my finger into existence, and it smells of nothing.” And: “My skin looks fantastic, but my suffering borders on madness.” Within days of the first tweet, it had thousands of followers, so it seemed to have hit a nerve.

What is it about the philosophy and quotations of Kierkegaard that hits such a perfect note of contrast with Kim Kardashian’s tweets?

If I had to analyze it, I’d say that Kierkegaard the philosopher reveals Kim’s hidden darkness, while Kim adds fun and glamor to Kierkegaard’s seriousness. They add a dimension to each other and also make fun of each other in a beautiful way. And I think Kim Kierkegaardashian speaks to the duality in all of us. We’re all both frivolous and philosophical. We’re all a union of the temporal and the eternal.

Moreover, I think Kierkegaard’s voice is still pertinent to our times. There is so much left out from our daily conversation, from our news feeds, from our timelines. Life is not as simple as Instagram would make it seem. Beauty magazines are full of messages that can seem oppressive and disempowering to women, messages they are penalized for ignoring and also called shallow for heeding. There’s not much space for complexity. Kim Kierkegaardashian, at its best, reclaims bits of language from this pop cultural landscape, and with Kierkegaard’s help, gives it back some of the complexity it’s lacking, and gives us a deeper picture of the self, in a funny way. As in: “A white blouse is classic. It says: my pain and my suffering are nameless; there is no one who understands me.” And: “I love your Tumblr’s infinite scroll-down feature & the unfathomable, insatiable emptiness behind it.”

How has this year felt different for you, in terms of Being Online? Do you think ‘the discourse’ is getting better or worse? Are the things we find funny changing to reflect the intensity of the political atmosphere we have to confront each day?

Yes, this year—or maybe the last couple of years—have been very different. The tone has gotten toxic, and the medium itself has been revealed to be toxic, thanks in part to the social-media-obsessed orange-haired sickness that has infected our country. Facebook and Twitter, whatever their benefits, are also helping corrupt our democracy, and all of us who participate in it are part of that corruption too. I don’t really know the way out, because to some degree it’s also become the medium through which I express my grievance with the way things are. I critique social media through social media, which obviously has its limits. But I sense and hope that there will be a shift in how people use social media going forward—we will use it more critically, or we will regulate it. Something has to give. And definitely, yes, I think the times lend themselves to comedy that is dark and also earnest. People are in an anxious mood, but they’re also searching for something.

Do you think that the Twitter audience and our culture, in general, is more receptive to ethics and philosophy than they might have been four or five years ago? I’m thinking of other successful forays of ethics into the mainstream, like The Good Place, and how people seem absolutely starving for philosophies that fit the way they want to think about their decisions.

Yes, I think there’s a hunger, if not a desperation, for philosophy and meaning. I think we are a society in dire straits. I’m still a cheerful and optimistic person, but you have to look around yourself and be realistic. Our unseemly reverence for celebrity has culminated in the election of a reality star president who is raining ruin and misery upon the powerless, who scorns people of color, abuses women, and threatens to undermine our democracy. It’s like, how did we get here and how do we get out of this? Life feels unsettled, and people are anxious and becoming conscious of their despair. Comedy is obviously not going to fix these problems, but it speaks to them.

I think of sitcoms in the ’90s, like Seinfeld, which was all about these cynical, petty people; or Friends, which was just complete froth. Both very funny shows, in their way. But sitcoms like that maybe wouldn’t speak to us as much today, because we’re in a crisis, and we’re aware that we’re in a crisis. We’ve been shaken awake.

I love The Good Place, and I think it is quietly subversive insofar as its message seems to be: read books! The whole secret of becoming a good person is apparently to read books—and in particular, philosophy books. And in particular—guess who? Kierkegaard. So I’m definitely a fan of that message, although I would throw in fiction, too. The question is, can we get off social media and television long enough to actually read anything?

Tell me about your book. What’s in there?

My Beautiful Despair is a distillation of Kim Kierkegaardashian’s greatest wisdom, and makeup and fashion tips. Something magical happened when we moved from the ephemeral medium of Twitter into the pages of a hardbound book. It becomes something else, something compact and powerful and really funny, if I may say so. It’s very strong.

I was pleased to look at the online reviews and see that readers were loving the book, and saying that it was even funnier than the Twitter feed. The book has a new introduction by someone who I’m told is a very famous professor of philosophy. And it’s visually beautiful, too, thanks to Dash Shaw’s wonderful and mysterious illustrations. Dash is a cartoonist and filmmaker, and his illustrations add a wild new dimension to the text. I think the book makes for an amazing stocking stuffer, one that really speaks to our times. Self-promotion is very much in the spirit of this mashup, so I’m allowed to say all this.

Do you have an all-time favorite post from your feed that you feel nails your tone and intention with the account?

The message of the book is that life is filled with despair, yes, but acknowledging the despair is the first step towards finding a way out of it. It’s ultimately a hopeful message, so I’ll leave you with one of the more uplifting aphorisms: “You exist. You are a human being. The sun shines for you, and your eyebrows are thick, natural, and amazing.”

I really mean that!