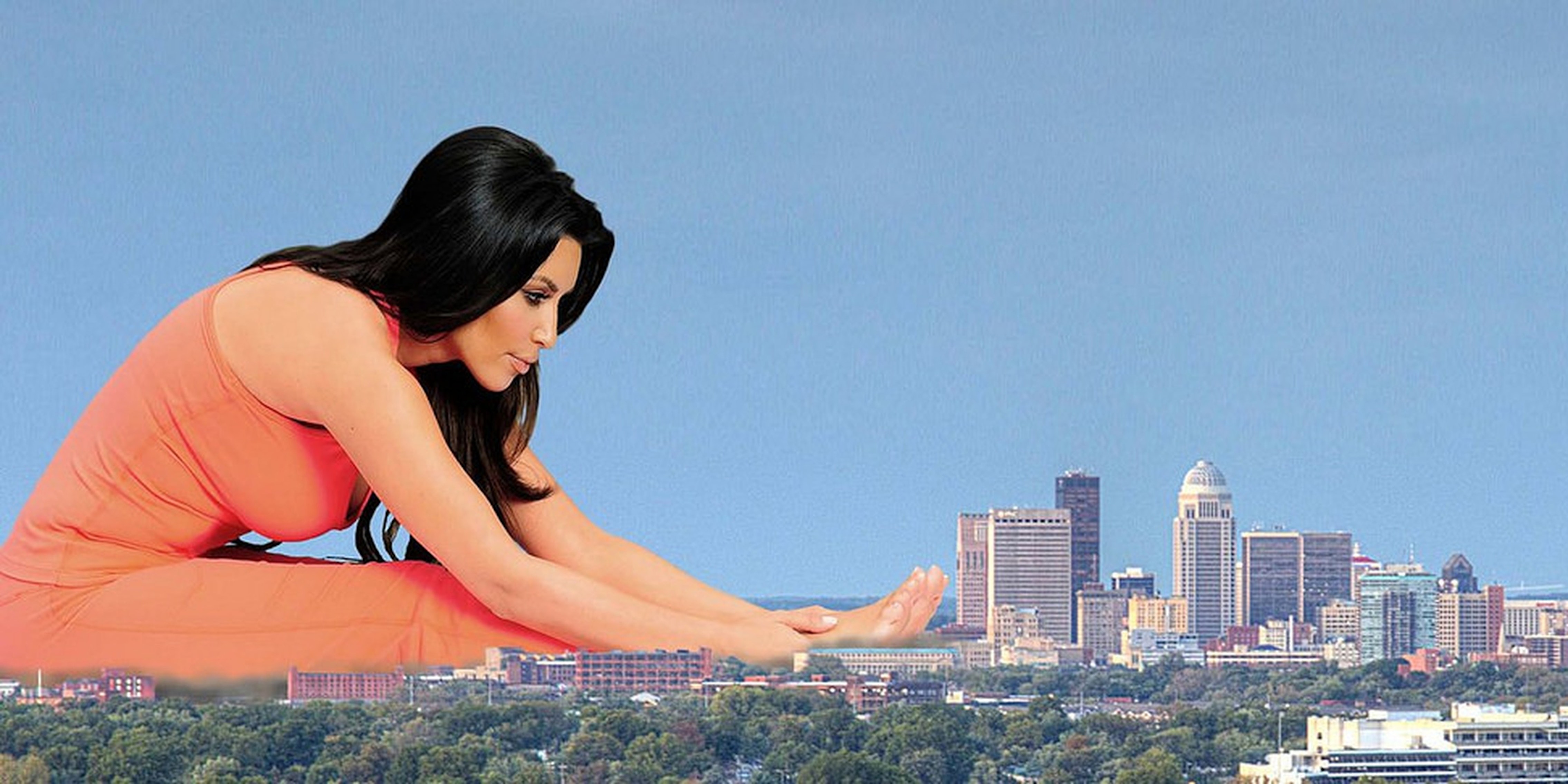 On the Internet, people have no idea what to do with her.

America’s obsession with celebrities has a tendency to reveal the complex depths of our social and cultural prejudices. In the case of Kim Kardashian, one observation becomes very clear: Americans need to stop seeing race as a black-and-white issue, and on the Internet, people clearly have no idea what to do with her.

If being Armenian makes Kim Kardashian a “woman of color” does that mean I’m partially black?

Why doesn’t Kim Kardashian get credit for revolutionizing the standard of beauty as a woman of color? https://t.co/62LhDadkwu

If Jessica Alba is a woman of color then so is Kim Kardashian. Why do Hispanic white people get to be PoC but Italians, Armenians etc. dont?

Kardashian’s husband, rap luminary Kanye West, recently drew attention to his wife’s experiences with racism at a BET Honors event last week when he addressed rumors that his wife was only married to him because of his successful career. During the speech, he shared an anecdote about how her father (the late attorney Robert Kardashian, best known as a member of O. J. Simpson’s legal defense team) responded to bigoted threats, telling his daughter, “One day, you may have a black child…a beautiful, beautiful, beautiful black child…and it’s gonna be hard. You’re gonna see how hard it is.” West was no doubt at least partially referring to an incident in June when Kardashian reported being harassed on an airplane yelling for her to “shut that black baby up.”

On the Internet, people clearly have no idea what to do with Kim Kardashian.

Along with catching flak for being in an interracial relationship, Kardashian has been part of a larger cultural trend in which celebrities are attacked for embracing diverse identities that don’t easily fit into a narrow black-white dichotomy. For Kardashian herself, this occurred in November when a Paper magazine cover celebrating her famously ample posterior was widely criticized on the Internet for echoing stereotypes about black bodies, prompting debate over whether the Armenian-American should be considered “white” or “ethnic white.”  The controversy was also marked by mother-shaming, class-shaming, and general garden-variety prudishness on the Web.

Last month, Rashida Jones faced a similar problem regarding her race, documented in a video that has recently gone viral. While being interviewed on the Screen Actors Guild red carpet, a confused reporter complimented the actress by saying, “You look like you just came off an island. You’re very tan, very tropical.” Jones, who is biracial, replied: “I’m ethnic.” Outside of the African-American paradigm, there have been plenty of celebrities whose status as “white Hispanics” has caused confusion over their racial identity, including Cameron Diaz, Jessica Alba, and Freddie Prinze, Jr. Similarly, a white-passing actor like Keanu Reeves has often benefited from white privilege in casting even though he is partially of Asian descent.

On each of these occasions, a celebrity’s racial identity became the subject of scrutiny precisely because their image allowed different sections of the public to project their own perceptions onto them. More importantly, like Kim Kardashian, their own bodies were used as the cultural text to determine their whiteness or lack thereof, as opposed to any informed analysis based on their actual genealogy.

Additionally, however, the racial politics seen in Kardashian’s body aren’t making the news due to simple confusion over skin pigmentation. They are also derived from how she juxtaposes her sexual identity with physical and cultural tropes commonly associated with the black community. “The photo shoot, which evoked controversial images of black women,” wrote Bethonie Butler of the Washington Post, “has staked an ongoing debate over how black women are represented (or not) in mainstream media.” Similarly, as West noted in his speech, Kardashian’s openness about her interracial relationships has also raised questions about her views on race and how she racially self-identifies.

Ultimately, this is an issue that has very little to do with Kardashian or any other specific celebrity. Instead it is about the nuanced ways in which we as a society perceive race, which is often in the eye of the beholder. To use one particularly notorious example: After the controversial shooting of Trayvon Martin in 2012, a great deal of media attention focused on whether the perpetrator George Zimmerman should be identified as white or Latino. “To those grieving an injustice, Zimmerman was a white man,” wrote Isa Hopkins of Salon, “those who celebrate his acquittal have been quick to point out that Zimmerman is, in fact, not white at all, but Hispanic.”

Because the conventional historical pattern of white-on-black racial violence was partially inverted by Zimmerman’s half-Latino background, his racial identity became a touchy subject in the case. “His father suggest[ed] that Zimmerman look[ed] white but his mother’s Peruvian heritage means that he too understands racial discrimination and would never discriminate against another racial minority,” observed Professor Isabel Molina-Guzman of the University of Illinois at Urbana-Champaign. “Shortly thereafter the news media correct themselves and finally and controversially Zimmerman becomes a ‘white Hispanic,'” just like Cameron Diaz and Jessica Alba.

While it would be easy to glean the lesson that we shouldn’t judge people based purely on their physical appearance, the underlying problem is deeper than that. As America rapidly reaches the day when whites are no longer the majority in this country, a phenomenon known as “white minority politics” has emerged, one in which Americans who identify as white claim to feel attacked based on their own heritage. While the most conspicuous target of this development has been President Obama, it has also exacerbated Americans’ historic tendency to whitewash their own culture or simplify the boundaries of diversity.

In Kardashian’s case, the core of the problem is that her ethnic background doesn’t fully sync with her image. Although Armenians were legally considered white in this country as of 1909, Kardashian’s physical attributes make it easy for her to be juxtaposed with stereotypes about African Americans. Similarly, her determination to self-identify with black culture because of her upbringing and personal life further blur the lines of her racial perception. While she isn’t a passive recipient of ethnic confusion like Rashida Jones, or someone of non-white descent whose body allows her to benefit from white privilege like so-called “white Hispanic” celebrities, the dialogue around her racial identity is still symptomatic of a cultural desire for clear-cut racial archetypes.

This speaks to the ever-changing bounds who gets to be white in today’s America (remember: there was a time when the Irish weren’t white), and Salon’s Erin Keane suggests Kardashian is the most fitting symbol of our contemporary confusion. Keane writes, “Like a round, shiny mirror, Kardashian’s butt reflects back to us our myriad cultural panics and anxieties, inviting us to oil them up and present them to the world in one glorious compendium of concern trolling and shame that reveals more about us than any magazine cover could of her.”

The Washington Post‘s Sally Kohn suggested that Kim Kardashian is exploiting our racial mores for profit, “She’s like a buck-naked Trojan horse for a devious message: that the rest of us shouldn’t get our panties in a bunch about sexism and racism because, hey, Kim Kardashian is laughing about it. All the way to the bank.” However, it’s just as likely she isn’t thinking about it. After giving birth to her first child last year, Kardashian wrote, “To be honest, before I had North, I never really gave racism or discrimination a lot of thought. …  I guess it was easier for me to believe that it was someone else’s battle.”

However, race is Kim Kardashian’s problem—because it’s everyone’s problem. She might be smiling when you look at her in the Paper magazine photos, but that doesn’t mean the reality is all that funny.

Photo via Chevywoodstgod/Flickr (CC BY 2.0)