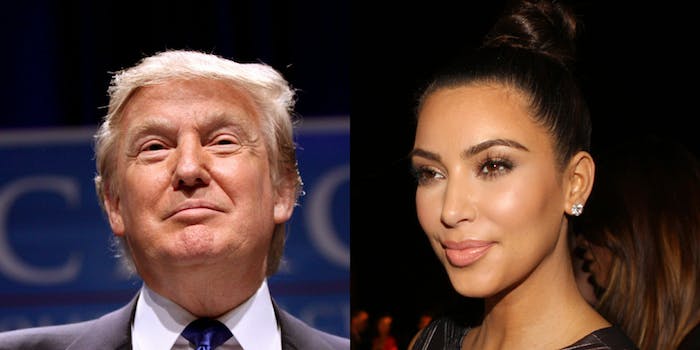 'But what does the embroidery on her pants say?'

President Donald Trump on Wednesday tweeted what may be the most cursed image of the year: It’s a photo of him smiling at his Oval Office desk with a solemn Kim Kardashian West at his side. The internet is horrified and coping with jokes, of course.

Kardashian’s White House visit was anticipated. She had been planning to meet with Trump and other officials, including Jared Kushner, to discuss prison reform and ask for the pardon of a 62-year-old woman in jail.

I see the summit with Kim is back on… https://t.co/8rQOL47tfB

KIM KARDASHIAN'S COMING OVER DON'T TELL JEFF SESSIONS I WANT TO MAKE HER THE NEW ATTORNEY GENERAL ALSO HAVE YOU SEEN MELANIE? pic.twitter.com/BryvoLwRlR

What wasn’t anticipated was the photo that came out of the Kardashian-Trump meet up.

Daily Beast writer and critic Ira Madison III pointed out an intriguing coincidence: Kardashian’s appearance with Trump comes on the 20th day that first lady Melania Trump has been absent from the public eye.

Amid many conspiracy theories, the Kardashian photo brings up a new one: Has she been replaced?

“So, here’s the pitch. It’s a fish out of water story but get this, he’s the president and we have Donald Trump play him. And then, here’s the kicker we have Kim Kardashian play his sassy but still incompetent Chief of staff. It’s like Veep meets The Purge.” pic.twitter.com/3EO9V87vAL

Even beyond the dystopian implications, there were other questions about the photo. For example, what’s up with Kardashian’s pants?

I'm not saying @KimKardashian is sending us a secret message but also what does the embroidery on her pants say? pic.twitter.com/JBL10qCSkB

And when’s the beauty line dropping?

Donald is wearing KKW Beauty foundation in Nonsensical Screaming Papaya and Kim is sporting creme lipstick in Kanye We Need to Talk pic.twitter.com/zYqZPUK8ka

But here’s the biggest question: Why didn’t any of us see this coming?