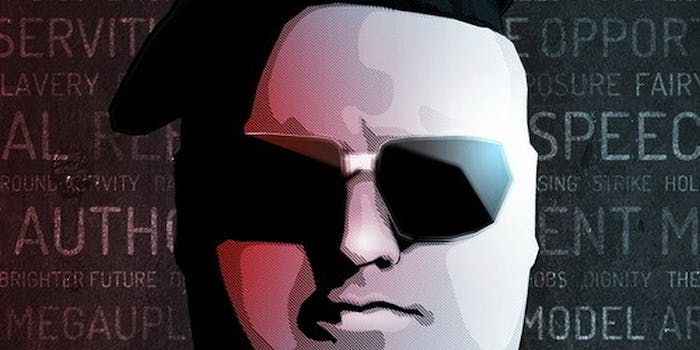 In an announcement, Dotcom called Mega "The Privacy Company."

Bitcoin has a major new online participant, but it may not help the experimental online currency’s reputation as an economic medium for extra-legal activities.

Dotcom took to his Twitter feed over the weekend to announce his company’s new payment option, stressing the privacy angle. Bitcoins are virtually untraceable as a unique code that can be spent like cash and are untethered to any sort of traditional bank account.

“Believe me: Privacy is the next big thing on the Internet. And #Mega is all about privacy. We are ‘The Privacy Company,'” Dotcom tweeted just before making the announcement.

Mega follows such sites as Reddit and WordPress in allowing users to pay for services with Bitcoin. It will offer six different payment plans in exchange for cloud storage space. Bitcoins are currently trading at $26. All told, the value of Bitcoins globally is currently in excess of $200 million.

Since relaunching his file-storage service last month—one year after its predecessor was shut down by the U.S. government for copyright infringement—the boisterous Dotcom has been flaunting improved security with mixed results. The site, which has seen steady growth in user activity, is trying hard to present itself as a legal operation following last year’s take down, but the community is still proving a popular destination for online pirates, with the launch of a third-party piracy engine within days of Mega’s launch.

This may not help the reputation of Bitcoin, either. The currency certainly has its ideological supporters among those who favor an unregulated and decentralized currency, but Bitcoin’s rapid growth over the past four years has been driven less by ideologues and more by those looking to circumvent the law.

Bitcoin already fuels sites like the Silk Road, which was doing nearly $2 million in business monthly last year selling illicit drugs online. And the new currency is catalyzing a resurgence in online gambling, thanks to a loophole in federal anti-online gaming statutes.

“Bitcoin’s by their very nature are meant to be private. They’re meant to be spent like cash” said Nikos Kaplanov, editor of the Temple Law Review and an expert in the legality of Bitcoin. “Naturally, that’s made in an attractive choice for people who are engaged in illegal activities and don’t want financial records tied to their activity online.”

This could include the kind of media pirates that Mega’s predecessor site, Megaupload, was accused of harboring. And although the endorsement of a site as popular as Mega will help Bitcoin continue to grow, Kaplanov said the currency still needs to find more mainstream use if it’s to gain any legitimacy as a rival currency to the dollar, euro, or pound.

“It’s still got a bit of stigma attached to it, I think,” Kaplanov said. “It’s still this very underground.”