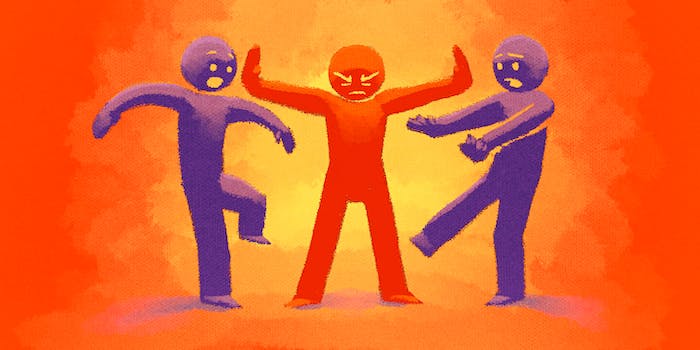 The Kentucky county clerk has more in common with the racist bus driver than she does the heroes of the civil rights era.

In a mission to cast Kim Davis—the Kentucky clerk who has been temporarily jailed for refusing to issue same-sex marriage licenses—as a martyred culture warrior, conservatives are comparing her to the heroes of the civil rights movement. Iowa Congressman Steve King tweeted that Davis should win the Rosa Parks Award, a sentiment echoed by conservative talk show host Jesse Lee Peterson, who wrote on Twitter that Davis is a “modern day Rosa Parks.”

In 1963, we should not have honored SCOTUS decision to creat a wall of separation between prayer & school. Kim Davis for Rosa Parks Award.

Similarly, frequent Fox News guest Pastor Robert Jeffress told host Tucker Carlson that Davis is like Martin Luther King, Jr., in her belief that “whenever man’s laws conflict with God’s moral law, we have to obey God’s moral law.” This comparison has also been made by Davis’ lawyer and founder of the Christian right-wing legal group Liberty Counsel.

But listen up, conservatives—Kim Davis is not your Rosa Parks. To understand why, it’s important to recognize the key difference between the civil rights protesters of the mid-20th century and the so-called “religious liberty” protesters today—the former fought for a disenfranchised group that was lobbying for equality, while the latter represents a powerful group that wants to maintain social exclusion. As the Huffington Post’s Gabriel Arana put it, Kim Davis has more in common with the racist bus driver than she does Rosa Parks.

Part of the problem with claiming that Davis is a powerless victim, of course, is that until the Supreme Court intervened, she was the one with all the authority.

“At heart, civil disobedience is a way of dramatizing injustice. You break a law and invite the state to exercise force against you,” Arana explains. “Davis doesn’t fit into this template. As a county clerk, she’s an agent of the state like former Alabama Gov. George Wallace, who famously stood in the doors at the University of Alabama to try to stop racial integration from taking place.”

Kim Davis has more in common with the racist bus driver than she does Rosa Parks.

While Davis’ political office was vital to her power, though, her behavior primarily stems from the fact that—like many Americans throughout our history—she used her religion as a basis for discriminating against a minority group. During the early years of the American republic, states like Massachusetts, New York, Maryland, Delaware, and South Carolina had laws requiring officeholders to be Christian. Persecution of Catholics and Mormons was rampant among Protestants at various points in our history, while various churches used their influence to justify slavery or segregation as divinely sanctioned policies.

This power dynamic has been particularly stark when it comes to the LGBT rights movement. Until 1962, no U.S. state had repealed its anti-sodomy laws. This means that until just over six decades ago, the moral concerns of religious Americans had literally criminalized same-sex relationships.

Even then, it wasn’t until the Stonewall Riots broke out in New York City seven years later that the LGBT movement in America began to truly emerge as a major civil rights effort in this country. Before then, religious control over public policy pertaining to queer Americans had been unquestioned for nearly two centuries in America.

Despite these facts, right-wingers like Davis and her supporters continue to claim that they are the victims in post-Obergefell America. A Pew study taken last year found that a majority of white evangelical Christians believed they experienced more discrimination than blacks, Hispanics, Muslims, Jews, and atheists.

“If claiming to be a victim is powerful, believing you are a victim is far more so,” wrote Valerie Tarico of Alternet. “In the case of Christianity, the theology of persecution serves to give the faithful hope… but it has also blinded generations of believers to the possibility that sometimes the hardships they face are due not to their faith or outsiders hating Jesus, but to the fact that they hit first.”

What makes people like Davis feel as though that they are being persecuted is that for centuries, they have been the ones who had all the power. This is why businesses in Indiana that discriminate against gay couples or clerks in Kentucky that refuse to issue same-sex marriage licenses can label their behavior as acts of “religious liberty”—because only a few years ago, the definition of “liberty” was written to benefit them. After all, as writer Salman Rushdie reminds us, countries like the United States were founded on the basis of “freedom for religion, not from it.”

The reality of religious liberty in America is evident in how Republican presidential candidates like Sen. Ted Cruz (R-Texas), former Arkansas Gov. Mike Huckabee, and Sen. Rand Paul (R-Ky.) are defending Davis— despite the fact that she clearly broke the law. Huckabee, who plans to visit Davis in jail, has even said that if he were elected president, he would likewise refuse to “bow down to the false gods of judicial supremacy.”

In a USA Today op-ed, Huckabee continued, “When the Supreme Court abuses the limits of its power and attempts to create a right that doesn’t exist in the Constitution, it is the duty of the president to reject this threat to our religious liberty as ‘the law of the land.’”

The biggest issue with anointing Kim Davis as an underdog hero is that there are far too many Americans—including many of those running for president—who want to follow in her footsteps. Thus, we can’t afford to lose sight of what separates a bully from a victim. The gay couples who asked to be legally married in Rowan County, Kentucky weren’t harming anyone or asking to harm anyone—all they demanded was recognition of their rights.

Instead of forcing LGBT people to the back of the bus, it’s time to show people like Kim Davis their rightful seat.