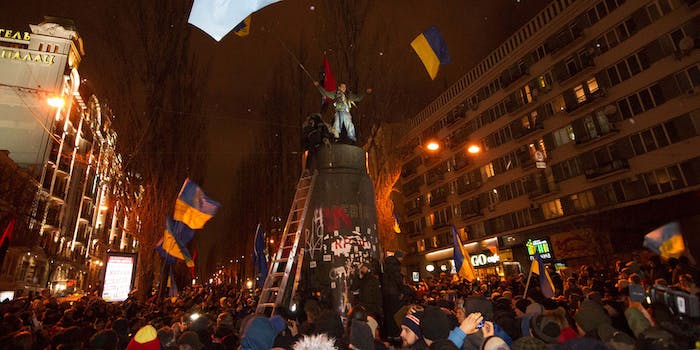 You have been "registered as a participant in a mass disturbance."

In addition to bullets, tear gas, and firehoses, law enforcement officials attempting to break up riotous protestors in the Ukrainian capital of Kiev appear to be employing a new, ominous tactic to try and quell the demonstrations.

On Wednesday, some protesters near the Ukrainian Parliament building began receiving cryptic texts on their phone informing them that they had been “registered as a participant in a mass disturbance.”

The language of the messages themselves echoes the recently enacted anti-protest legislation that sparked the violent flare-ups in the first place. Since Sunday, thousands of protesters have been engaged in open confrontation with police in the streets of Kiev’s government district. The rioting has led to hundreds of injuries and at least two fatalities.

Demonstrations in the Ukrainian capital turned violent after the government enacted tough new laws that could see protesters sentenced to prison for up to 15 years. The laws were passed in an effort to end a two-month-old protest against Ukrainian President Viktor Yanukovych’s unpopular decision to spurn an economic compact with the European Union in favor of closer ties with Russia. Yanukovych has called the protests “crimes against the state.”

Protesters who received these ominous messages on their phone accused the government of intimidation.

“I think these texts are stupid and are targeting people who are easily scared,” Yuri Maslovsky, a 38-year-old protester from Kharkiv told the Guardian. “They are not going to scare off the people who are already protesting.”

Indeed, the messages have done little to quell the demonstrations which continued on into Thursday. The BBC reports that riots and protest have begun to spread outside the capitol. There is still hope for a peaceful resolution however as a cease-fire was called Thursday to allow for negotiations between the president and opposition leaders.

It’s not known how many messages were distributed, and the country’s interior ministry has denied involvement. When it comes to enforcing the new protest ban, the ministry said it is studying video footage to single out and arrest the most active riot participants.

It’s not hard to imagine that the Ukrainian government would have some means of sending messages to protestors based on phone GPS data. As TechCrunch reports:

“Governments around the world, including the U.S. government, are increasingly brazen about their use of location tracking of dissidents and protesters. According to the USA Today, Miami-Dade police told the city council they had purchased a location-tracking system specifically to monitor protesters.

Until recently, the Saudi government had kept a digital leash on women trying to leave the country, notifying their male guardians when they left.”

According to the Guardian, several Ukrainian telephone service providers also denied any involvement with the text messages that were all sent from the same 111 number, using identical text.

“We have nothing to do with the distribution,” said mobile provider MTS in a formal statement.

Kyivstar, another major service provider in the region also claimed non-involvement, saying, “We know that there is equipment, so-called ‘pirate base stations,’ which allow SMS distribution or calls to all mobile telephone numbers of all operators within a particular area. But, as an operator, we are unable to identify the activity of these stations.”

Protesters have also been using technology as a vital tool in the ongoing struggle in Kiev. Since the initial protest against President Yanukovych’s economic policies began in late November, a Kiev blogger and activist has been livestreaming the demonstrations and uploading hundreds of hours of footage from the streets. It’s the kind of instantaneous documentation that would have been unthinkable 20 years ago.