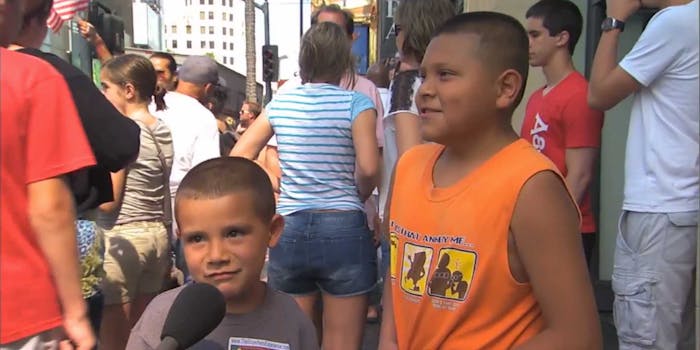 "Who did we declare our independence from?" the interviewer asks a young girl. "Canada," she replies.

“The Star-Spangled Banner” is a staple on July 4 and during major sporting events. But we really know what it means when we sing the lyrics?

The National Anthem, originally a poem, wasn’t part of the American Revolution. It was written by Francis Scott Key while he was detained aboard a British ship during the Battle of Baltimore in September 1814. Moved by what he saw, he wrote the poem down on the back of a letter. Music was added a few years later, but the song didn’t officially become the national anthem until 1931.

Jimmy Kimmel reflected on the tune during his show on Wednesday. He didn’t understand what the song meant as a kid, and years later, he admitted that he probably still didn’t quite get it.

And because kids say the darndest things, he sent a camera crew out to Hollywood Boulevard to ask a bunch of kids about the song’s lyrics and how they interpreted them.

Not many of them remembered all the lyrics—although some tried—and some were a little rusty on their history.

“Who did we declare our independence from?” the interviewer asks a young girl.

Kimmel’s audience has a mix of laughs and awwws as the kids explain a song they know nothing about. One girl even called herself “dumb” for not knowing the lyrics.

There’s plenty of time to learn.