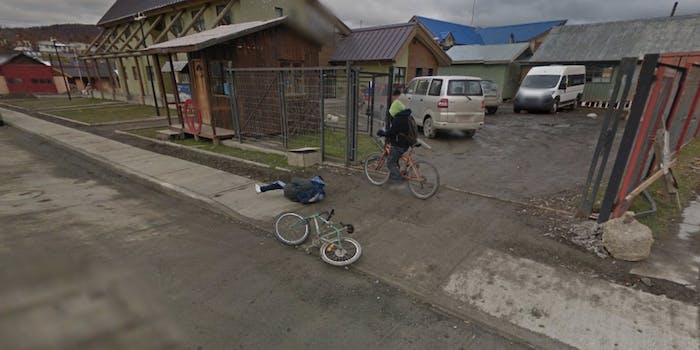 Google Maps amazingly captures a kid falling off his bike

Falling off your bike with spectators watching is embarrassing enough. But the humiliation gets turned up all the way when freaking Google Maps captures your fail.

In the Chilean town of Puerto Williams, a youth was making his way down the streets on his bike when he took a tumble after just passing a fire department. He eventually got up and looked to be alright aside from totally eating it in front of his friend and a few other people on the street.

But somehow the moment was caught by Google Maps street view, only to be memorialized on the internet.

It looks like this all went down in May 2015, but the captured fail is still up. This was posted to r/ChildrenFallingOver, which yes, is a real thing.

Does the kid even know that his blunder made it onto Google Maps?

SEE ALSO: This island uses sheep to map the landscape