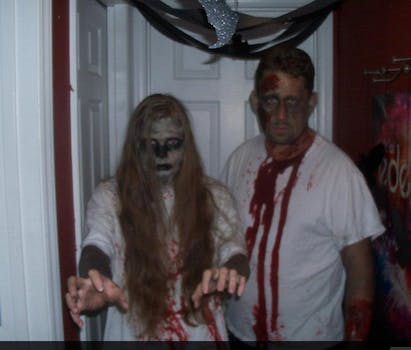 It's not just a bridal ceremony. It's a horror film—starring you.

Everybody dreams of throwing the perfect wedding. For Niki and Kevin Plumley, who married in January but have yet to hold a ceremony, their idea of the ideal wedding includes hordes upon hordes of zombies.

“We absolutely love zombies, obsessively,” bride-to-be Niki told the Daily Dot from her hometown of Charlotte, NC. “We watch Walking Dead every Sunday, and we have zombie everything—decorations around the house that are zombie themed. Every chance that we get to go into costume, we do zombie makeup on ourselves.”

It’s with that enthusiasm for the walking undead that the couple has set out to zombify their wedding (date TBD). Recently, the two launched a Kickstarter campaign to raise $20,000, money that will go towards makeup and costumes for all the ceremony’s attendees and for a film crew to document the event. It’s a lofty goal, but the Plumleys believe the price is right for the history they’re about to make.

“I’ve seen a few instances where people have had weddings, and the bride and groom are dressed all normally, and then they have zombies come up for photos and stuff,” said hubby Kevin. “But I have yet to see anything that is a full wedding procession of people in zombie makeup. Everyone is going to be in costume, and we’re going to have random people walking around—through the aisles, wherever they are.”

For now, the couple may want to exert less energy on preparations and focus more of their time pushing for backers. With 23 days left in the campaign, Niki and Kevin have only received one donation for $50, leaving them $19,950 short of their intended goal.

“We’ve talked to people about it, and they think it’s a fun idea, but they haven’t backed the project yet,” said Niki.

Maybe people would be less hesitant to donate if the Plumleys revealed plans for the wedding reception’s meal. No amount of support is worth having to dine on a plate of brain soufflé.