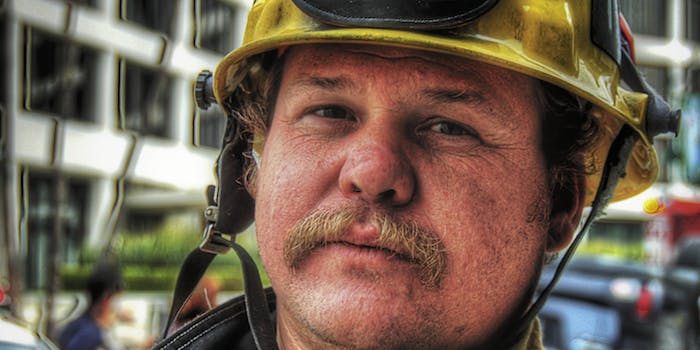 A husky Washington couple hopes to reimagine the firefighter calendar—with bland bodies and a charitable cause.

Six-packed, chisel-chinned firefighters pose for the camera every year, lighting up 12-month pinup calendars with their sensuous smiles to raise money for burn survivors and disabled children. In Washington, two part-time emergency medical technicians (EMT) with a little more burl on their belly than Ashley from Fort Worth, Tex. want to know, “Why not us?”

Husky husband-and-wife duo Ivan and Amanda Lewis recently launched a Kickstarter campaign to fund The Turnouts 2013 “Average is Sexy” Firefighters Calendar, a 12-month, 1960s-inspired pinup calendar featuring some of the most bland bodies in the part-time firefighter game. With 21 days left in their campaign, the couple has only managed to raise $20 of its $5,000 goal.

“It’s kind of silly,” husband Ivan told the Daily Dot. “We thought it would be fun to have guys and gals that are just, you know, guys and gals doing this sort of tongue-in-cheek expose. Lots more smiles than stone-faced looks.”

Lewis, who’s 23 and works as a business manager at a Kumon tutoring center, said that the two have rounded up a number of EMTs from Sultan, Wash., to lend a hand—and obviously plenty more—to the project.

“It’s all about what you do with it,” he said. “One guy on our team, he’s 350 pounds! He’s an EMT, in great shape, looks great, but he’s not that guy. He doesn’t swoon women from across the room. I’m a little more round than I’d like to be, but we’re different. We’re good at what we do, and that’s that.”

They’re good at what they do, and they’ve got their minds in the right place. The Lewises are hoping to put this calendar together so that they can raise money to walk in the Susan G. Komen Race for the Cure, a three-day event that carries a $2,300 per person entry fee.

Raising money for charities is what firefighter calendars are all about, he says. If full-time studs can do it, why can’t he and his wife?

“They do the calendar, and then for months and months, they do the big dinners and the catwalk,” Lewis said. “People are swooning. There’s no doubt that what they do is an incredible thing, but there’s a dynamic in play that we’re part-time firefighters, and they’re full-time.

“In a lot of senses, we do exactly the same job, but we don’t do it every day. But when the fire alarms go off, we’re going to respond to that call, whether we’re working full-time or working twelve hours a week at minimum wage.”