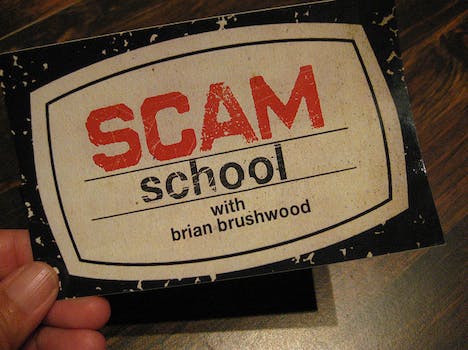 Kickstarter cops have outed a scammer.

Creators of the gaming project Mythic: The Story of Gods and Men canceled crowdfunding on their campaign Sunday after mounting evidence secured by community backers revealed the multi-level role-playing game to be a fraud.

Little Monster Productions had raised $4,739 of its $80,000 goal before it canceled the funding. In the project’s FAQ section, the company wrote that the $80,000 was money that would get added to $300,000,000 production budget already more than halfway filled by an angel investor.

“They do not exist out of this Kickstarter page,” he wrote. “They have no business, no press contacts on their website. Even the pictures of their supposed offices were stolen from another company.”

Little Monster responded to the allegations quickly, writing that the game’s development was already underway and the project was not a scam, but it didn’t have much of a case. The company canceled funding for the project shortly thereafter.

Little Monster’s story represents a growing concern around Kickstarter—one that has gaming campaigns going up on the crowdfunding site that aren’t fully realized or appropriately budgeted.