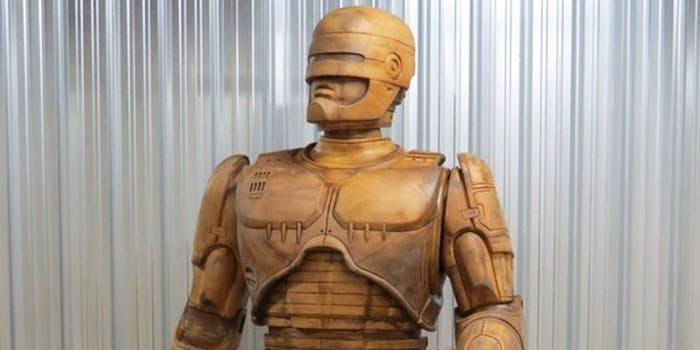 Detroit police is partnering with federal law enforcement officials to do anything they can to get gun violence under control.

After more than 60 homicides and 214 nonfatal shootings this year, Detroit police is partnering with federal law enforcement officials to do anything they can to get gun violence under control.

Hopefully in a few weeks, this crime-fighting team will also include RoboCop—sort of.

More than two years ago a group of diehard RoboCop fans launched a Kickstarter project to build a life-size monument of the cyborg after Detroit Mayor David Bing shot down the prospect on Twitter. The group ended up raising more than $67,000, and as of Sunday has lifted the 10-foot-tall statue to its feet.

“So far he’s passed from you, the backers, to Fred Barton’s expert custom sculpting, to Across The Board Creation’s 3D scanning, digital enlarging, physical fabrication, and assembly in foam, wax, clay, and steel (pictured below), and now he’s headed to Venus Bronze Works in Detroit for casting and manufacturing in bronze,” wrote the RoboCop team on Kickstarter. “We bow to all parties for going above and beyond.”

The statue does not have a definite home yet, but fans hope it will be place near Detroit’s historic Michigan Central Station.

Check out the following GIF of RoboCop in all his glory.