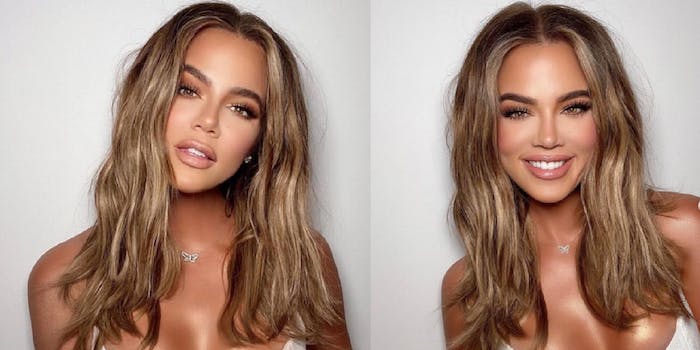 Another day another online Kardashian roast. This time, people are coming at Khloé Kardashian for an Instagram post they think doesn’t even look like her—with some believing she even looks more like her best friend, Malika Haqq.

In the post, Kardashian is seen wearing a white corset-like top contrasted by impossibly glowy skin. But no one cares about that. People can’t get over her face, like, her whole bone structure looks different.

“Khloe Kardashian don’t even got the same skull anymore,” one Twitter user stated.

There’s been no shortage of speculation about how Kardashian got the new look, but the top two theories are Photoshop or plastic surgery. Both things the Kardashian-Jenner clan are no stranger to.

As usual, Twitter came through with the quick and slightly petty humor.

“I don’t keep up with the Kardashians. When did they recast Khloe?” one quipped.

Another pondered over how she would use her iPhone’s Face ID if she has that feature set up.

One very observant Twitter user pointed to Kardashian’s seemingly missing necklace chain as proof that the picture may just be Photoshopped.

Others are saying Kardashian looks alarmingly similar Haqq, an actress and TV personality who has regularly appeared on seasons of Keeping Up With the Kardashians.

“Has anyone checked in on Malika. What if Khloe literally took her face,” one user questioned.

It’s important to note that Haqq is a Black woman and the Kardashian-Jenner clan have been co-opting Black looks and culture for years.

Kardashian has yet to respond to comments about the controversial photo. One thing is for sure, she definitely got “under bitches skiiiinnnnn.”