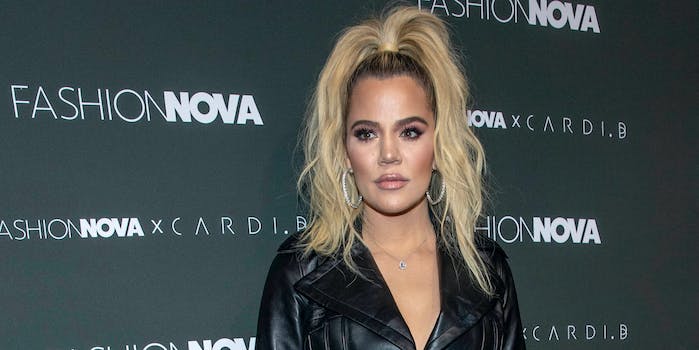 ‘It’s sad’: Khloé Kardashian’s team is trying to get an unapproved bikini photo scrubbed from the internet

The photo was taken by her grandmother, according to DMCA notices.

The photo was taken on Easter Sunday and features Kardashian in a bikini standing near a pool while holding her phone. To an untrained eye, the photo does not appear to be Photoshopped or manipulated.

But as the photo was shared online, it started meeting pushback. People who tried tweeting the photo of Kardashian were met with DMCA takedown notices or had their Twitter accounts locked for copyright infringement.

The Kardashian camp blamed the photo on an assistant who “posted on social media without permission by mistake” and claimed that Kardashian had the right to use DMCA notices to take down photos she never intended to post.

“The color edited photo was taken of Khloé during a private family gathering and posted to social media without permission by mistake by an assistant,” Tracy Romulus, chief marketing officer for KKW Brands, said in a statement sent to Page Six. “Khloé looks beautiful but it is within the right of the copyright owner to not want an image not intended to be published taken down.”

Page Six also reported that Kardashian was mid-conversation when the photo was taken.

But according to a DMCA takedown notice sent to @KosmeticKrys that Kardashian’s maternal grandmother, MJ Shannon, actually took the photo.

Despite Kardashian’s efforts, it’s pretty easy to find the “color edited” photo of Kardashian online. Many of the posts from both people who tried to share the photo and those just talking about it were complimentary toward Kardashian.

People highlighted the hypocrisy of Kardashian and her team being able to use their clout to get images removed when it’s much harder for the non-famous—even when the offending material is illegal.

But what it also did was highlight the far-reaching extent of just how insecurity and impossible beauty standards can affect someone like Kardashian, who has made an effort to get a photo that might not have been meticulously edited or wholly approved by her and her team offline. (Which, due to the Streisand Effect, probably won’t happen anytime soon.)

“the fact that this picture is apparently not good enough for social media by khloe kardashian’s standards is all the proof you need that influencer culture and today’s beauty standards are utterly fucking us over,” @mollusksk wrote.