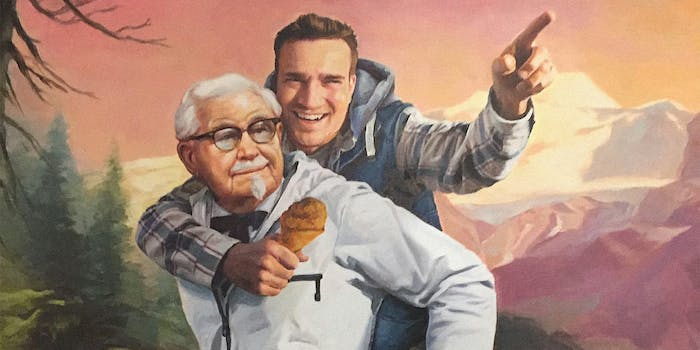 Is KFC being clever or devious?

Back in October, the Daily Dot reported that a man named Mike Edgette discovered something peculiar about the KFC Twitter account. The fast food chain only followed eleven other accounts: All five Spice Girls and six guys named Herb. In other words, eleven herbs and spices.

People on Twitter were duly impressed, retweeting the discovery over 300,000 times and liking it over 700,000, more than a million people combined.

Edgette then sat back and, not so patiently, waited for his reward to roll in.

Which, eventually, it did.

You said you needed time. We're just giving you space. DM us when you're ready.

His prize? A painting of himself with Colonel Sanders and an endorsement on LinkedIn.

And possibly a bunch of money? At least that’s one theory making the rounds online. After the painting hit the front page of Reddit, users said they smelled a conspiracy.

He points out that Edgette works for a PR firm called TallGrass Public Relations and that he’s made other post about Yum! Brand companies (Yum! Brands is KFC’s parent company, which also owns Taco Bell, Pizza Hut, and WingStreet).

TallGrass, however, is not directly affiliated with KFC or Yum! Brands. The whole idea of KFC’s Twitter account only following eleven herbs and spices was actually dreamed up by mega-advertising firm Wieden+Kennedy, which represents such brands as Coca-Cola and Old Spice.

“We planted this on Twitter over a month ago,” Freddie Powell, creative director at Wieden+Kennedy, said in a statement released to AdWeek. “Frankly, we weren’t sure if anybody was going to find it. Sometimes you just have to put stuff out into the universe and cross your fingers that the internet will work its magic.”

So, at least according to the company that created the viral ad, no one, including Edgette was in on the gag.

That hasn’t stopped people on Twitter from calling foul. For his part, Edgette has also denied being on the payroll of either KFC or Wieden+Kennedy.

KFC’s digital marketing manager, Bentley McBentleson, (which, to add to the conspiracy talk, has a name that totally sounds made up) also says that claims of a hoax are false.

Wieden+Kennedy and TallGrass have worked together at least once in the past. When TallGrass created a press release for Wiredrive, a “media assets management service,” Wieden+Kennedy was one of the companies it quoted in the release.

But people have also pointed out that Edgette wasn’t actually the first to discover the eleven herbs and spices Easter egg.

A woman named Laurel pointed it out four days before Edgette.

KFC follows 11 people.. 5 of them are members of the spice girls and 6 of them are guys named Herb.

And DJ Chaz Kangas found it almost as soon as it happened.

It looks like @kfc is following 11 people named Herb and Spice Girls. Relieved their unfollowing of me last week wasn't personal/political.

Why did KFC ignore these tweets but not Edgette’s? Maybe they never saw Laurel’s because she didn’t tag them. Maybe they decided Kangas’ was too soon to be fun. Or maybe, say skeptics, they wanted to go with an inside guy so they could control the marketing.

So what’s really going on here? Did Edgette, who just happens to work for a PR firm, stumble across KFC’s subtle joke and post a tweet about it that went viral, or is he in cahoots with big chicken? Could he have been tipped off by a friend?

Just like the secret blend of eleven herbs and spices, it will have to remain a mystery… for now.