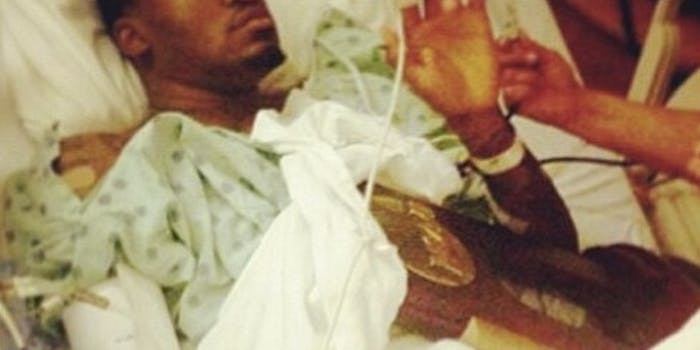 Louisville sophomore Kevin Ware is out; @LifeAsKevinWare is in. If you were wondering if anyone could be this terrible, the answer is yes.

In case you were wondering if anyone could be this terrible, the answer is yes.

On Sunday, during March Madness, some people saw Louisville guard Kevin Ware’s right leg land on a once-in-a-million bad angle, splintering out like a snapped Slim Jim, and rushed to their computers, one thought in their head: “I should make a Twitter parody account of that.”

It was “maybe the most gruesome injury in the history of televised sports,” Deadspin wrote. But at least three Twitter users saw opportunity, not horror, as paramedics rushed Ware to the hospital. They promptly registered @KevinWaresLeg, @KevinWareLeg, and @LifeAsKevinWare, and have thus far accumulated more than 7,000 followers.

@kevinwaresleg is the only actual parody account, in the sense that it simply tweets the jokes that Ware’s actual leg—were it somehow sentient, wry, and either not in constant, horrendous pain or shock—would say. “If anyone can send me some cash I’d appreciate it. I’m broke as hell,” it tweeted, as Ware’s teammates finished the game without him. Then this: “Is a broken leg a pre-existing condition? #Obamacare.”

@LifeAsKevinWare purports to actually be the sophomore guard’s actual account, though that’s clearly not the case. It tweets drivel like that passed-around photo of Ware’s teammates crouched over him, but overlaid with “1 tweet = 1 prayer.” That was retweeted 34,476 times. Similarly, an obvious lie about paying for Ware’s bills: “For every #Retweet, $1 will be donated to help him heal” fooled 41,465 people.

Least imaginative is @KevinWareLeg. Apparently, it’s the former account of a Boston sports fan (tweets about the Celtics and Red Sox go back to July) who just changed the account to the hottest topic in the sports world. It claims to have started the #WinForWare hashtag. OK.

There is, at least, a silver lining for Ware, who had surgery Sunday evening and won’t play again for months: His team stomped Duke 85-63, advanced to the Final Four, and handed him the team’s regional trophy.