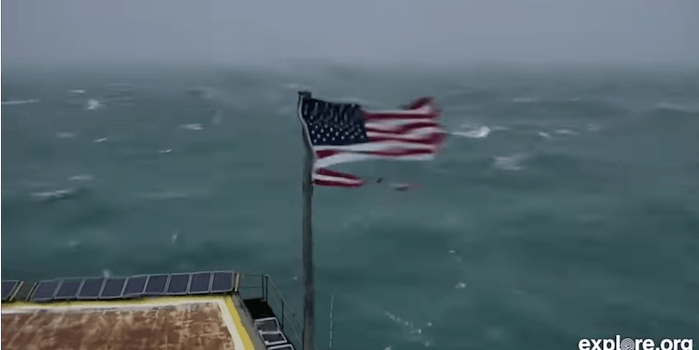 An American flag enduring the tearing winds of Hurricane Florence has become an internet hero. It even has a nickname: Kevin.

WATCH: American flag rips under the intense winds being stirred up by Hurricane #Florence along the coast in Cape Fear, North Carolina. https://t.co/ZlcnJY07oW pic.twitter.com/yit7bpXRiG

The flag was watched by thousands online during a livestream on Thursday from the Frying Pan Tower, which is off the coast of North Carolina. A camera was pointed directly at the flag at the edge of the coast guard station, and it showed the flag being slowly ripped apart by the weather.

YouTube commenters started calling the flag “Kevin,” and the name stuck. One fan even created a Twitter account, @kevintheflag, for the flag. “Just your basic flappy boi tryin to make it in this world,” the bio reads.

The tweets are in the voice of Kevin, who seems optimistic about surviving the hurricane.

To those of you betting on when my lower three stripes will blow away, shame on you! #kevintheflag #standwithkevin #fightforkevin

A couple weeks back Tom Land, Noel Land and Simon Silvagno replaced the tower’s flag fully expecting it to fly proud for…