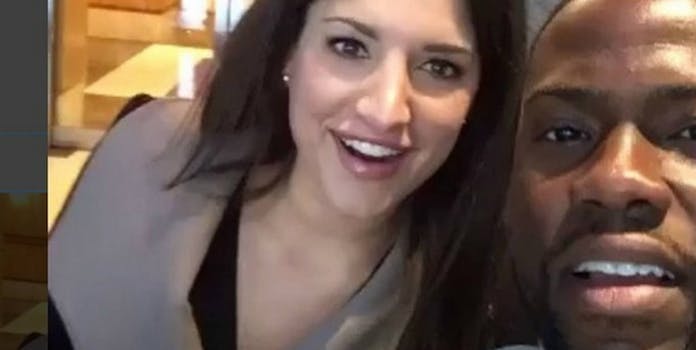 Yeah, that's definitely not him.

It’s normal that when spotting a celebrity you really admire, you temporarily forget their name. Whether it’s the excitement over finding out that person is actually real or whether you’re too busy preparing your phone for a selfie, it’s not uncommon to get flustered in front of the celebrity you love. (That’s why you should always wear a shirt of their face whenever you leave your home.)

But usually, the celebrity doesn’t piggyback off that faux pas and turn it into a viral video. Unfortunately for this woman—who seems to really love Chris Rock even though she either doesn’t know what Rock looks like or thinks all African-American comedians are one and the same—Kevin Hart wasn’t about to let her off the hook.

She thought he was Rock, and so he filmed his encounter with her to prove it.

“Rock The World” doesn’t exist, by the way, which makes the burn all the more brilliant. (Unless Hart was talking about this Christian music festival that will be blasting Santa Claus, Indiana, this August).

Unfortunately for Hart, this isn’t the first time he’s been mistaken for another African-American comedian. Looking at you, Google.

Oh @google can you please take my picture off of "Bills Cosby's" net worth search….Thanks in advance guys!!!! Appreciate ya

All of which makes you wonder: When is Kevin Hart going to finally catch a break? Oh, wait.