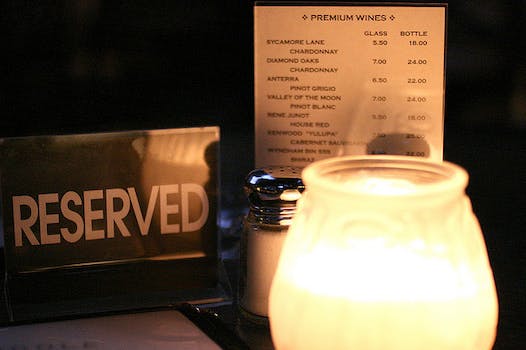 Today’s special: A side of public shame

Getting called out for not showing up for your reservation? Now that's just childish.

“I’ll be there for your ballet recital.”

Which of these three promises is the most important? Breaking promise #1 is pretty egregious. Missing out on promise #2 can be made up for with ice cream and cupcakes—a puppy if absolutely necessary. Promise #3, though, doesn’t really even figure into the discussion. It’s a restaurant reservation. It’s not a promise so much as an intention: a piece of the social contract that says, “you set aside a table at a certain time on a certain day and I’ll be there with money.” If you don’t show up, the world doesn’t end. In fact, nothing ends. The worst thing that happens is that the table sits empty until other people arrive to take the place of your no-showing ass.

Over the weekend, though, a restaurant in Los Angeles made it clear that they have had enough of people not showing up for their reservations. Their solution? Publicly shaming every no-show (by name) on Twitter. 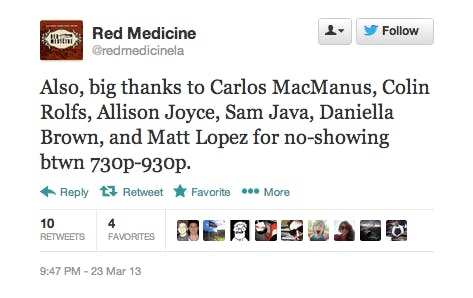 At best, this is a publicity stunt. At worst, it’s a childish reaction to an everyday situation. No-shows are a reality in the restaurant business. It’s the equivalent of “breakage” in retail stores. Yes, it’s annoying, but it happens pretty much all the time. Most restaurants accommodate the prevalence of no-shows by overbooking the dining room or requiring credit cards to secure a reservation. Very few (read: none) of these places—until now—deal with broken reservations by publicly shaming the no-shows.

This isn’t that much of a surprise if you consider the restaurant doing the shaming. Red Medicine has a history of social media scandal, started when they took and posted a photo of Los Angeles Times restaurant critic S. Irene Virbila to destroy her anonymity. An online firestorm ensued and Red Medicine got a ton of attention for it. 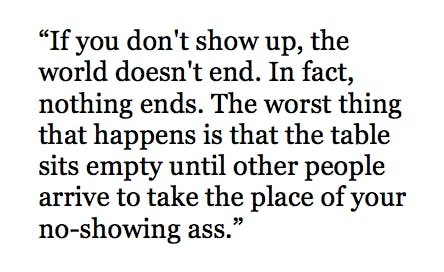 This more recent dust-up seems to be spawned from the same parent: manager Noah Ellis. It’s a tried-and-true example of shock PR. Over fifty people have gotten involved in the comment section of Eater LA and more are sure to join the chorus. The response has been all over the map. Some people are defending the restaurant; some people are vowing to never eat there again; and, since this is the Internet, some people just want to fight.

One of the most compelling comments came from anonymous Guest #42, who wrote: “Stop crying about it. It’s one of the outcomes of online reservation systems. People aren’t obligated to stick to their plans.” This is thought-provoking. Does making a reservation online make one less obligated to actually use the reservation? No. Of course not! That’s insane. That’s like saying that you don’t have to pay for that copy of Fifty Shades of Grey because you bought it on Amazon instead of at your local Barnes & Noble. Just because something happens online doesn’t mean the commitment you make is lessened.

But Guest #42 has a point nonetheless. I agree that online reservations feel more tenuous than those made over the phone. When you can do something with two clicks instead of a full phone call, it feels less important. Ease connotes impermanence. That IKEA furniture in your bedroom seems more disposable than the antique armoire you inherited because it only took an hour to make (two, if you spent time trying to find that missing screw). When OpenTable and Urban Spoon and every other online reservations system made it so easy to make reservations, they also made it so easy to not show up for those reservations. After all, it’s just a click.

In a perfect world, people would make reservations and they would honor them. Restaurants would do the same and have your table ready at the time of your reservation. But this isn’t a perfect world, and no-shows (as well as occasional long waits despite a reservation) are part of the business. At one point, a while back, things that happened on the Internet did feel less important than things that happened IRL. That’s no longer the case. A reservation isn’t much of a promise, but it’s a promise nonetheless. If you’re not going to make your reservation, do the decent thing and cancel.

Restaurants need to do the decent thing, too—we all know that no-shows happen. Publicly shaming your guests is just petty and stupid. Red Medicine may have lost seven tables worth of business last Saturday, but they’re probably losing many more future tables for being jerks about it.

Now about that ballet recital that I missed…