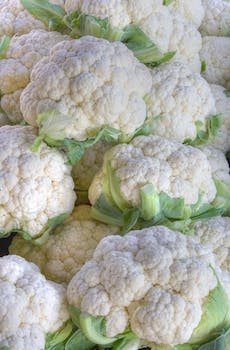 It's official: cauiflower has kicked kale out of the limelight. Here's why the Internet's new darling is this lumpy white cabbage cousin.

Should we expect anything less from the consumer engine the Internet is? It’s nothing if not relentless in its offerings; content isn’t consumed once a day (or once a month) with your morning coffee anymore. It’s a 24/7 news cycle even when the news happens to be about crucifers instead of shootings. So we need something new, a new “it” star for every passing moment. The veggie star of the moment is cauliflower, and that statement alone is cause for alarm.

Cauliflower, you ask? Yes. Cauliflower. You may remember it from your mom tossing it with overcooked carrots and broccoli. That homey side is now a sexy star. In Los Angeles, Chef Jason Neroni of Superba Snack Bar serves a “Cauliflower T-Bone” that LA Weekly recently dubbed #33 on the list of their 100 Favorite Dishes. It’s a slab of cauliflower cut crosswise and marinated in clever marketing.

Poor, rejected kale—kale, who used to be the #1 stunna in the vegetable world, so quickly discarded, doomed to relieve her stardom swanning around a decrepit mansion in once-glamorous turbans. In its heyday, kale hit the mainstream so hard that Slate ran parodies of kale eaters. Now that dark leafy cabbage relation is old news, usurped by its paler cousin. The reviews are in and they’re raves: the New York Times Magazine recently declared cauliflower the hottest new protein substitute and detailed all of the chefs who are filling prime plate real estate with cauliflower these days. In January, the New York Times itself ran a feature on cauliflower recipes. Blogs everywhere are booming with cauliflower riffs, from cauliflower fritters to cauliflower and pear soup.

Of course, the truth is that this kind of fetishization of ingredients isn’t new. We’ve been choosing one vegetable after another as superstars for decades now. In 1985, the Chicago Tribune ran an article entitled “Good Old Vegetables With Their Great Taste Are The New Thing.” This “vegetable renaissance” has been going on for more than a quarter of a century! Back then, the “it” vegetable was baby carrots. Can you believe that? Baby carrots were cool in 1985.

Seven years later, the Chicago Tribune was talking veggies again. This time, they were making fun of the baby vegetable trend of nouvelle cuisine and hyping the health benefits. Baby vegs were on their way out, soon to be superseded by the likes of broccoli. In 1999, the Seattle Times extolled broccolli’s new renaissance, thanks to pre-packaged florets and well-publicized cancer-fighting properties. A year later, Ann Hodgman penned a story for the now-defunct Gourmet Magazine about ramps, giving them national prominence and setting in motion a decade long place of honor on many spring menus for the onion-like vegetable.

So it’s not that we’ve chosen cauliflower as the it veg de jour that’s so surprising; turning produce into celebrities is clearly not new. It’s the way the Internet is magnifying that trend that is, a result of the Internet echo chamber.

What used to be the territory of a few niche publications catering to the food-obsessed—Bon Appetit, Food & Wine, the now defunct Gourmet—is now a huge swathe of the Internet. One big story gets published by one of those major food outlets, and all of a sudden there are little stories commenting on the big story. Reaction pieces and recipe aggregators. Twitter battles and retweets and pins and re-pins. Links upon links emailed all over the world. In the real world, a story on cauliflower becoming more popular with chefs could disappear the day after it was printed. In the internet echo chamber, the story resonates over and over again, getting louder and louder.

Food blogs feed us, in a way. But they also create a hunger. Food media has exploded and with it comes a voracious appetite for the new. We don’t just talk about steaks anymore. We talk about what cut, where it was raised, what the cow ate, who’s serving the best steaks, who’s serving the cheapest steaks, how to cook steak on a grill, how to cook steak on a camping stove, and a quite literally infinite amount of topics that relate to the once simpler world of steak. Food media has become a cottage industry rife with nuances and niches and arcana that nobody in their right mind cared about forty years ago, unless they owned a restaurant or a farm, and maybe not even then. This is our new world order of food.

Welcome to the Produce Future.