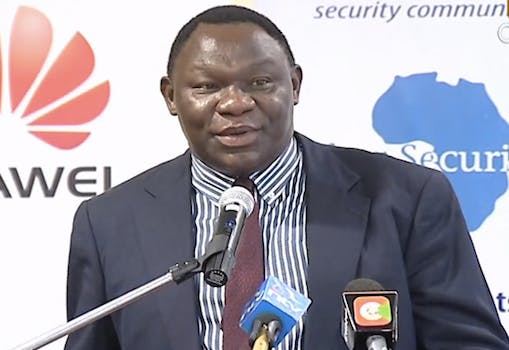 A prominent member of Kenya's cabinet has threatened to crack down on citizens who use Twitter for hate speech.

A prominent member of Kenya’s cabinet has threatened to crack down on citizens who use Twitter for hate speech.

“Most people probably are thinking it is not easy knowing who they are,” he added, warning that his agency has “the capacity to do triangulation, and very easily get to the person, and that is what we are going to do with the names that we have.”

It’s unclear if Ndemo mistakenly thinks one can “triangulate” something on the Internet, or if he meant it as a euphemism for tracking down twitterers through other means. Regardless, by Kenya’s little-understood Information and Communications Act, anyone who “sends a message” online that’s either “grossly offensive” or “false [and] for the purpose of causing annoyance,” is committing a crime. Those found guilty of violating that law can be penalized with up to three years in prison and a fined up to 1 million Kenyan shillings ($11,534 USD).

Ndemo indicated that the Kenyan government already had compiled a substantial list of citizens whose online activity it disapproved of.

“If we begin to prosecute […] we would actually finish all the bloggers that we have out there,” he said. “Even you yourselves maybe said something in your blogs.”

It’s not unheard of for Kenyans to be arrested for their tweets. In August, blogger Robert Alai, who boasted 20,000 followers at the time, repeatedly tweeted that a government spokesman was trying to kill him for his support of a sexual assault victim. He went so far as to tweet the spokesman’s number, posting, “FOOLISH PIG is drunk with power.” Alai was convicted of violating the Information and Communications Act, and released after posting Khs 100,000 ($1,153.40 USD) bail.

In 2011, an unknown blogger had threatened, “ROBERT ALAI […] WILL SOON BE DEAD.” Alai later tweeted a photo of himself, beaten and bloodied, purportedly taken a few days after the threat.

It’s also unclear if Ndemo truly plans mass arrests, or if his goal is to scare Internet users.

“It is good that we create awareness,” he stated.