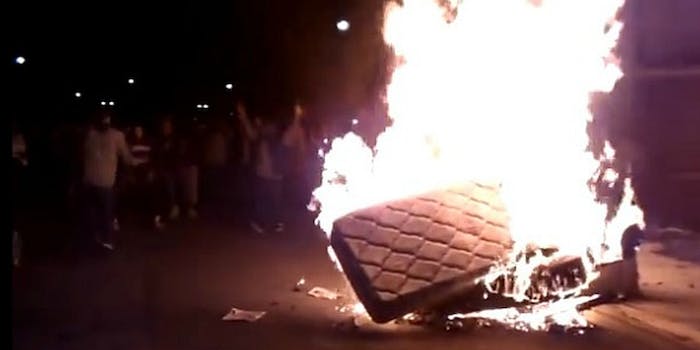 How the Internet reacts when white people riot

If a West Virginia University team wins the big game, a certain segment of students will riot. We know this, because it happens with regularity. The rebel-rousers will burn couches, they’ll crowd-surf on the streets of Morgantown, and they might even throw rocks at the police who are trying to keep the peace. It can get ugly.

If a West Virginia squad loses the big game, those same students will riot. Couches will burn, property will get destroyed, and cops and their drawn batons will chase kids off the street. It almost definitely will get ugly.

Maybe more than a riot, it looks like a party. At first. But soon the lighters are struck and the fires begin to flame and the police start to pepper spray. Suddenly, it’s not a party. Suddenly, it’s a problem. 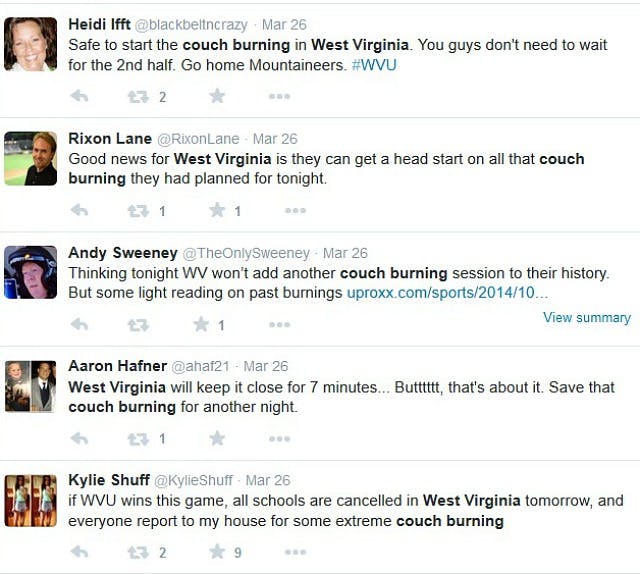 Maybe the national stereotype of a Mountaineers fan burning his couch because he can’t think of another way to celebrate or commiserate is humorous to some. But it’s not funny to the city of Morgantown, which made couch-burning a felony in 2011.

And it’s not funny to other college towns who have to deal with students who want to party with their friends in the street (like Duke with its NCAA basketball title victory on Monday or Wisconsin after losing to the Blue Devils). Are these riots, or are they just 18-to-21-year-old kids lighting fires to burn off some steam?

In the case of Duke, it’d be a stretch to call it a riot—after all, the bonfire late Monday night was sanctioned by the school and the local fire marshal—but what about those riots which cause thousands of dollars of damage and send onlookers to the hospital? What if the rioters had been the same race as those who protested in Ferguson, Mo., or for Trayvon Martin?

Would we laugh quite as much in that case?

The answer is no.

“Absolutely, it is framed through a racial lens for sure,” Dr. Ann Collins, the author of All Hell Broke Loose: American Race Riots from the Progressive Era through World War II, told the Daily Dot. “We saw that last fall for the so-called Pumpkin Riot in New Hampshire or even when West Virginia beat Baylor in football. When that happens, when it’s a bunch of alcohol-fueled kids doing it, we tend to think, ‘Oh, those are just kids being kids.'”

Depending on who’s in the streets, the tone of the media coverage surrounding these disturbances also is inconsistent. The riots in Ferguson filled the airwaves of the 24-hour cable news networks for weeks at a time. You could livestream it on the Internet, and you could watch the talking heads shake their fists at the hordes of people who filled the streets. Last August, Fox News invited Jonathan Gentry to sum up the station’s outrage at the black community in Ferguson: “All we know how to do is blame the police and white folks for our actions. All we know how to do is march and riot and loot. I’m sick of it! I’m sick of it!”

But unless you were paying close attention, you probably didn’t hear much about the approximate 1,500 people who took to the streets and the 31 people who were arrested last weekend in Lexington following the University of Kentucky‘s loss to Wisconsin in the NCAA tournament. They’re not destroying their communities, we could tell ourselves. They’re just raising a little bit of hell. That’s what you’re supposed to do in college.

Maybe those disparate ways of thinking have to do with the size of the crowd. Maybe it has to do with the skin color of the people who raise their fists to the sky. No matter your perspective on that dichotomy, people were detained and damage was done in Lexington. It wasn’t a disturbance of the peace. It was a riot.

Kentucky erupts in rioting after NCAA loss (They're blowing off steam) MSM would call them violent "Thugs" If Black pic.twitter.com/GKPVDluTWv

And maybe you remember the riot that broke out in Vancouver, Canada, in 2011 after the Canucks lost Game 7 of the Stanley Cup finals to the Boston Bruins. That caused an estimated $5 million worth of damage and injured about 100 people. But the only reason I recall it is because of this iconic image.

This wasn’t really a disastrous riot that damaged scores of businesses in Vancouver where people are still being charged in the incident. No, this was a sweet moment when a guy courageously kissed his girl among all the danger.

In much the same way, how many of these 50 post-sporting event disturbances put together by Five Thirty Eight do you remember? Probably only a few, if that many.

“They’re absolutely two different standards,” said Collins, who’s also an associate professor of political science at McKendree University. “When something like that happens in Ferguson, the people engaged in this activity are trying to highlight an injustice. But when you have Kentucky losing, it’s different because it’s not any sort of injustice in that way. It’s college kids running amok.”

That was the perception, anyway. That’s why we could poke fun at West Virginia’s expertise in couch burning. That’s why students believe they’re marking a rite of passage in the college experience by participating. But these incidents aren’t sweet or harmless or humorous.

“It’s not funny,” Collins said. “But since Ferguson, more and more people are highlighting that hypocrisy. I don’t think we’re quite there yet. But we do have more people calling out the hypocrisy. We very much have a double standard in this country. But we’re taking teeny, tiny steps.”

Because it doesn’t matter who’s participating or how much damage is done or what the optics look like on the news networks. No matter who’s doing the rioting, a riot is a riot.