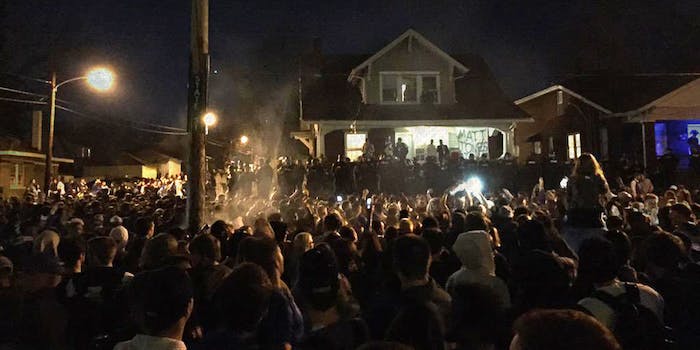 In my two hours on Lexington’s State Street, I witnessed the entire spectrum of college sports emotions.

The woman in a white blouse was hoisted above a man’s head while a giant mob of University of Kentucky students, local Lexington residents, and visitors cheered on just a few hours after their college basketball team had history cut short by the Wisconsin Badgers.

She smiled as the crowd chanted, “Show me your tits.” Lines of Kentucky police officers in full riot gear looked on. The woman lifted her shirt, resulting in hands violently grabbing her breasts and shirt while the mob cheered. The police stood by.

This was my first and last experience at Lexington’s State Street, ground zero for University of Kentucky sports fans following losses and wins alike. What I saw was nothing uniquely special to this basketball school but tragically disturbing considering how magical this college season had been for Kentucky.

In my two hours on Lexington’s State Street, I witnessed the entire spectrum of college sports emotions. The journey began a few blocks away on Lexington’s Limestone Avenue, a main vein leading to and from the university.

It was about 11:15pm, and I walked with two of my friends—both doctoral students and instructors at the university—toward State Street (full disclosure: I also teach at the school). The Kentucky Wildcats basketball team had just gotten beat by Wisconsin in the Final Four 71-64.

My friends and I were indifferent and in good spirits. While it was sad to see Kentucky fall, we were not new to this feeling of defeat, having attended basketball juggernauts like the University of Illinois, University of Connecticut, and Syracuse University. The students around us were eerily quiet. When this silence was combined with the street closings, the scene looked straight out of season 1 of The Walking Dead.

Kentucky police with road closures; at least one helicopter still hovering over the partiers on State Street pic.twitter.com/9KtLQLi9ld

The first thing that greeted us was the fire department and a small squad of police officers adjusting their Kevlar vests and riot helmets. Just across the street was the university hospital.

In the middle of State Street, thousands of fans filled the road and lawns. Some people clutched glass bottles of booze while most were holding phones to capture the mayhem. Lines of stoic police officers looked on. Fans ripped off their sweatshirts and T-shirts in order to light them on fire while using empty boxes of Natural Light as kindling. Like Boy Scouts, other men would kneel on the glass-filled street to gently breathe life into the flame.

Once an article of clothing was lit, it was hoisted straight into the air, forcing the crowd to cower in fear of getting burned.

Some of these ritualistic burnings resulted in police rushing the street and violently grabbing the amateur pyrotechnic. Other times, it was the fire department.

For the most part, the entire scene at State Street was nothing out of the ordinary for a college town. In 2014, for example, at least 35 fires were started and 29 people arrested on State Street following the school’s loss in the NCAA men’s basketball tournament, reported the Herald-Leader. Nineteen of those fires were of couches, which has become such a fixture around big sports colleges that satirist Jon Stewart had to weigh in following Connecticut’s 2004 NCAA run. Sunday night, 29 people would end up being arrested, according to the Leader.

Around 12:45am, my friends and I had moved out from the crowds to get some fresh air. Fans could be seen dancing to rap music blaring from a boombox someone had brought.

I was able to get Periscope, Twitter’s live-video competitor to Meerkat, to work for the first time that evening. I yelled to my friends that we were going back in to give the world an unadulterated look the revelry.

There were more burnings and more beer cans thrown into the air. At one point after 1am, the fire department stopped rushing students starting fires and instead used their hoses to put out the flames.

“We have to leave,” my friend said after seeing the woman groped.

At that moment, I was ashamed. I felt ashamed to be affiliated with the University of Kentucky and ashamed that I did not push my way forward to try and stop it from happening. This is the disgusting side of college sports. This is not how you celebrate a momentous basketball season.

All photos and videos by Fernando Alfonso III