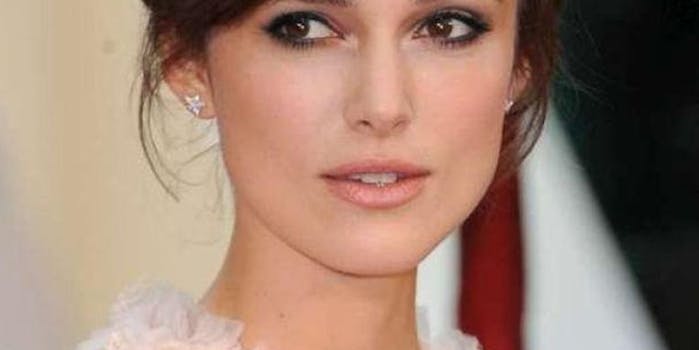 The Internet thinks Keira Knightley posing topless is "brave" and "bold." Pardon me while my eyes roll to the back of my skull.

Earlier this week, British actress Keira Knightley appeared in a topless photo shoot for Interview magazine. (The photos are NSFW.) In an interview with the British Times about the photos, Knightley revealed that she had agreed to do the shoot as a statement against Photoshop and digital retouching. “I’ve had my body manipulated so many different times for so many different reasons, whether it’s paparazzi photographers or for film posters,” Knightley said. “That [shoot] was one of the ones where I said: ‘OK, I’m fine doing the topless shot so long as you don’t make them any bigger or retouch. Because it does feel important to say it really doesn’t matter what shape you are.”

Knightley went on to add that she saw the topless photo shoot as a means of striking back in the war against women: “I think women’s bodies are a battleground and photography is partly to blame. Our society is so photographic now, it becomes more difficult to see all of those different varieties of shape.”

It was an admirable statement, and undoubtedly a savvy one from a public relations perspective: Since doing the topless photo shoot, photos of the 29-year-old actor, who is currently promoting her film The Imitation Game with actor Benedict Cumberbatch, have gone viral, and Knightley is currently trending on Facebook. Her decision to pose topless has been lauded as “brave,” “bold,” and “girl crush-worthy.”

There’s just one problem with this narrative. Knightley’s Photoshop protest isn’t “brave,” “bold,” or “girl crush-worthy” at all. In fact, if you take a look at the photos from the Interview article, with the exception of the appearance of her aereolae, she looks pretty much the same as she usually does in fashion magazines: Stunningly beautiful. And I’m not sure that I feel comfortable with the Internet collectively giving Knightley a cookie for making the earth-shattering point that a thin, white, beautiful woman like her will still look thin and white and beautiful, with or without Photoshop.

That’s not to say Knightley’s larger points about the importance of self-acceptance and her own experience with having her photos digitally retouched aren’t valid. Back in 2004, for instance, Knightley made waves for criticizing the posters for the film King Arthur, where her naturally small bust had been noticeably enlarged by a Photoshop-happy graphics editor. (The same thing happened when she appeared in an ad campaign for Chanel.)

I can only imagine how it must feel to constantly see your body parts edited and cropped and enhanced by bored graphic designers on a daily basis, just because they fall short of ridiculous and arbitrary beauty standards. And as someone who takes a great deal of pride in my own small-ish mammary glands, I shudder to think of the verbal lashing some poor producer would’ve received had he pulled the shit they pulled on Knightley on me.

But here’s the thing: Aside from having a slightly smaller chest than than the average pneumatic Hollywood ingenue, Keira Knightley falls well within Hollywood standards of beauty in every other respect. She is thin, white, young, and high-cheekboned, and she is regularly ranked among the sexiest women in the world by men’s magazines.

There’s hardly anything brave or bold or about a hot white woman whose hotness has been validated by the Hollywood establishment being hot and half-naked in a magazine; it literally happens every day. And there’s no substantive difference between the Interview photos and any photos of Knightley you’d find in Maxim or FHM or any of the other men’s magazines teenage boys use as fap material. But because “Photoshop” and “airbrushing” are two of those outrage-inducing buzzwords that the Internet likes to collectively froth over, we’ve responded to these photos as if Knightley found the cure for cancer.

In some ways, the public’s laudatory response to Knightley’s NSFW Interview protest is reminiscent of the #nomakeup selfie trend from earlier this year, when predominantly young, attractive, Caucasian women posted photos of themselves wearing no makeup on Instagram. In one notable instance, actress Zooey Deschanel posted her own #nomakeup selfie and was instantly applauded for “keeping it real” and being “brave.”

But as my editor Molly McHugh pointed out, Deschanel’s #nomakeup selfie, in which the actress looked like a slightly tousled version of her doe-eyed, adorable self, was “the worst kind of humblebrag,” the equivalent of a woman who brags about how she can eat ten pizzas in a day and not gain an ounce, or complaining about how she can never buy swimsuits because her boobs are so big and her butt is so small. “It’s even worse when someone who is inarguably positioned to be better looking than the average human tacks it on,” McHugh wrote. “And worse yet when we endlessly celebrate her for it.”

By posting an un-retouched photo of her thin and gorgeous self looking thin and gorgeous, I don’t think Keira Knightley is trying to pull off the world’s most infuriating humble-brag; I think her intentions are genuine, and she truly wants to shine a light on Hollywood’s oppressive standards of female beauty. Same goes for Zooey Deschanel or Dove and American Eagle, two companies that have also unveiled high-profile no-airbrushing campaigns.

But I think Knightley, and Deschanel, and Dove, and all the other companies that have made a point of saying they’re taking a stand against oppressive female beauty standards, while continuing to showcase the same types of bodies and faces we’ve been seeing for the past hundred years, need to take a step back and realize that they are not in the best position to do so.

We don’t need more images of conventionally attractive white women showing the world how conventionally attractive they are, with and without Photoshop. We need more images of women of all shapes and sizes and colors and sexual orientations doing same. Only then, when the rest of the world sees what a wide range of real, beautiful bodies looks like, will we have a shot at victory on the battleground of the war against women.