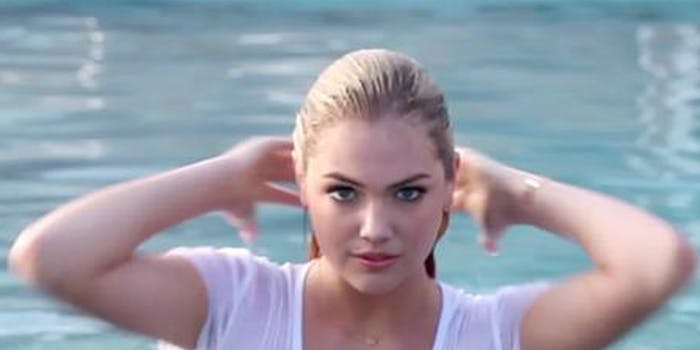 The latest video from the blonde supermodel and pervy photography Terry Richardson has been pulled from YouTube, raising questions about the site's policy on nudity.

It’s becoming the ultimate case of cat and mouse. Kate Upton posts a video to YouTube, YouTube rushes to take it down.

Tuesday marked the second time in two months that the massive video sharing site yanked a video of the buxom blonde because it violated YouTube’s policy on nudity or sexual content. (The site restored the first video, “Kate Upton—Cat Daddy,” after public outcry brought attention to the fact that the video did not actually violate any YouTube policies.)

This video, titled “The Many Talents of Kate Upton,” received direction from hipster photographer Terry Richardson and found Upton carrying out such visually stimulating activities as running along a beach in a bikini, skateboarding in a bikini, hula hooping in a bikini, and shooting a basketball in a cardigan.

But YouTube took the video down after only a few hours on site, saying that it violated the “common-sense rule” prohibiting “pornography or sexually explicit content.” The suspect segment in violation: a short clip of Upton wearing a wet T-shirt in a pool towards the end of the video.

“The Many Talents of Kate Upton” now lives on Vimeo, where it’s received 158,000 views.

YouTube’s banning of Upton and Richardson’s latest video raises a few questions about the site’s censoring efforts and when they’re put into place. Wet T-shirts are no stranger to YouTube’s community. Women wear them proudly on spring break videos seen by 277,000 people, strange satire clips from Upright Citizens Brigade vets GREGandLOU with 188,00 views, and Daytona Bike Week boogies with 237,000 views.

Some of those videos have gone untouched since 2009, but Upton’s only lasted on site for a few hours. Why? The answer’s unclear, and YouTube has not returned a request for comment.

What is obvious, however, is that Kate Upton is a megastar who regularly graces nationally circulating magazine covers and appears on television. The girls in the aforementioned videos are more or less nameless faces—to everyone except their mothers.

UPDATE: As with the previous Upton/Richardson video collaboration, YouTube has relented and reinstated “The Many Talents of Kate Upton.” Here it is, in all its freshly un-banned glory.